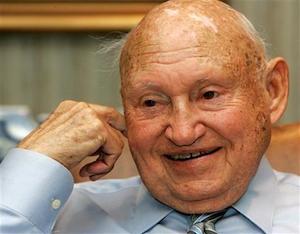 Chick-fil-A representatives announced the death of its founder, S. Truett Cathy, who died Monday at the age of 93.

Surrounded by family—Cathy had been in failing health in recent weeks—he succumbed at 1:35 a.m. The fast-food CEO was born in 1921 in Eatonton, Georgia, and spent his childhood in Atlanta. “Cathy relied on a keen business sense, a strong work ethic, and a deep Christian faith to build a tiny diner in the Atlanta suburb of Hapeville, Georgia,” the company wrote in a statement to employees.

Chick-fil-A, best known for its boneless chicken sandwiches, was born from Cathy’s ingenuity and imagination. The restaurant eventually grew into a nationwide chain and now features more than 1,800 restaurants across 40 states and Washington, D.C. Shortly before his health declined, Cathy stepped down as the company’s chairman and CEO last year, handing the reins of the business to his son Dan. The elder Cathy remained with the company as chairman emeritus.

Cathy is survived by his wife of 65 years, Jeannette McNeil Cathy, two sons, and a daughter, as well as 19 grandchildren and 18 great-grandchildren.

Another NBA Owner to Lose Team After Alleged ‘Racist Rant’