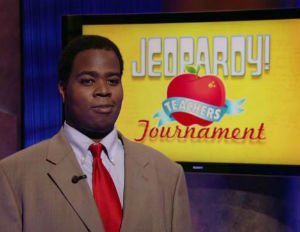 Burnett first won Jeopardy‘s Teacher’s Tournament in November of last year, telling the show’s audience he would use his winnings to move his mother to a new home in Chicago’s Austin neighborhood.

“It’s not about my life, it’s about my mom retiring–happily–in her own place…It means the world to me,â€ said Barnett in a Jeopardy interview.

The Chicago history teacher acquired a $17,000 lead against “his nearest opponent in Monday’s roundâ€, says the Huffington Post. While Burnett has earned nearly $350,000 in winnings from the show, he says he doesn’t plan on retiring or changing up his lifestyle anytime soon.

“I’m going to keep doing what im doing; my mom gets her house, I go back to my job that I love.”