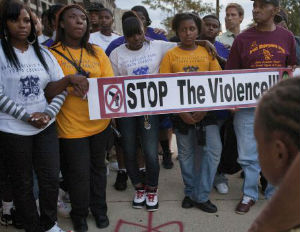 Chicago, IL has served as the headquarters of gun violence over the past year according to headlines, and this weekend was no exception. Five people were gunned down on Saturday (January 26), including Shirley Chambers’ youngest child, Ronnie, her now fourth child lost to gun violence.

The Associated Press reports that the Chicago mother’s son “was shot in the head while sitting in a parked car on the city’s West Side.â€ After losing two sons and one daughter to gun-related violence more than 10 years ago, Shirley was devastated Saturday.

“Right now, I’m totally lost because Ronnie was my only surviving son,â€ Chambers told WLS-TV. She continued, “What did I do wrong? I was there for them. We didn’t have everything we wanted, but we had what we needed. They took my only child. I have nobody right now. That’s my only baby.â€

Shirley Chambers’ first son, Carlos, was gunned down in 1995 by a classmate “after an argument,â€ he was only 18 years old. Five years later, in 2000, Chambers’ daughter, Latoya, and second son, Jerome, were “killed within months of one another.â€

Just after Ronnie Chambers was shot and killed, three men across town–in Chicago’s Southside neighborhood–were gunned down. Two men were found dead while the other was wounded.