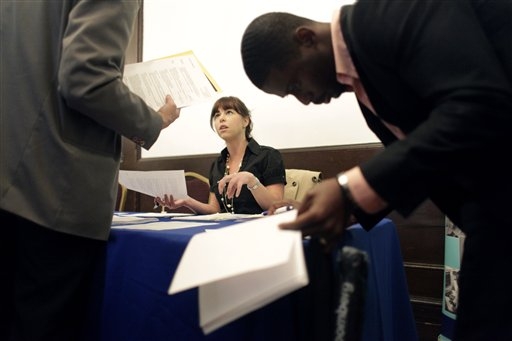 In this photo made May 18, 2010, Deji Ayoade, right, of Queens, who has been out of work for 6 months looks over a list of available jobs as Jaclyn Coughlan, center, a recruitment specialist with the Visiting Nurse Service of New York speaks to another job applicant during the "Putting New Yorkers Back to Work" Job Fair sponsored by The New York Society for Ethical Culture, in New York. The number of newly laid-off workers filing claims for unemployment benefits unexpectedly rose last week by the largest amount in three months. (AP Photo/Mary Altaffer)

A new report on youth unemployment in Illinois found that the alarmingly high rate of young black men and women in Chicago who are neither working nor in school has dropped.

Data collected from 2012 through 2016 under the Obama administration and published by the University of Chicago’s Great Cities Institute, found that there has been a decrease in out of work, and out of school rates for black 20- to 24-year-olds in Chicago in recent years, but that substantial racial and gender gaps still remain. And although the newly found statistics are encouraging, researchers found that nearly a third of black 20- to 24-year-olds and 37% of black 20 -to 24-year-old men are still out of work and not going to school.

To Jack Wuest, executive director of the Alternative Schools Network, the data demonstrate an urgent need for more government-subsidized jobs so young people can gain basic work skills and become contributing members of the labor force. “Getting people on their feet, doing some work, out of the house, gives them a sense of dignity and power that they can spend money on what they like as well as take care of their family,” he said. 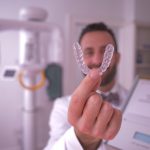 See How This Startup Is Making Teeth Aligners Affordable With Tech 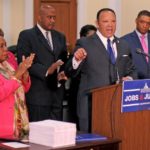