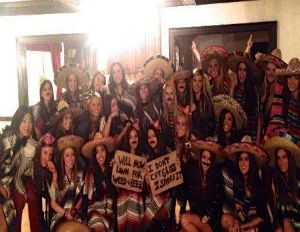 Members of the Chi Omega Sorority at Penn State are under investigation for a photo they took after a Mexican-themed party that was posted to the web and deemed “racially-insensitive.” .

The picture was taken around Halloween, and shows the women dressed in sombreros and mustaches. Some of the women held signs that read “Will mow lawn for weed + beer” and “I don’t cut grass I smoke it.”

The photo was posted on Tumblr and Facebook, where they were identified and tagged in the photo as members of the Chi Omega sorority.

Starbucks Expansion Planned in U.S. Over Next 5 Years