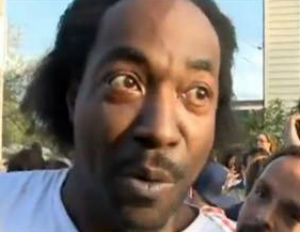 It wasn’t long before Charles Ramsey, the Cleveland man credited withÂ rescuingÂ three women from a decade of horrific captivity in Cleveland, was summoned away from Ohio to retell his story for the umpteenth time.

On Friday evening, Ramsey was spotted around Washington, D.C., where he’d been flown in for an appearance on boxing promoter and radio host Rock Newman’s show, reports the Washington Post.

During his appearance on Newman’s show, we learned Ramsey’s unlikely rescue story almost didn’t happen. The 43-year-old restaurant dishwasher told listeners he’d been suspended from his job the week before the rescue, after a manager discovered a couple of rounds of AK-47 ammo that fell from Ramsey’s pocket when he leaned over at work.

The bullets wereÂ souvenirsÂ from Ramsey’s friend who had just returned from a military service tour in Afganistan. But the manager of Hodge’s Restaurant, where Ramsey works, didn’t want anything like that in the workplace. Ramsey was sent home and lost a $269 weekly paycheck.

But it’s all good, Ramsey says:Â “If I hadn’t been suspended, I wouldn’t have been at home to hear [Amanda Berry’s] scream.â€

Ramsey’s 14-hour visit to D.C. included a stop for food at Ben’s Chilli Bowl, a private tour of the presidential yacht, aÂ dinner at a bordello-red burlesque place, a visit to a nightclub, and a couple of hours of sleep at the National Harbor hotel.