Women of Power: The Award-Winning Legacy of Charlayne Hunter-Gault 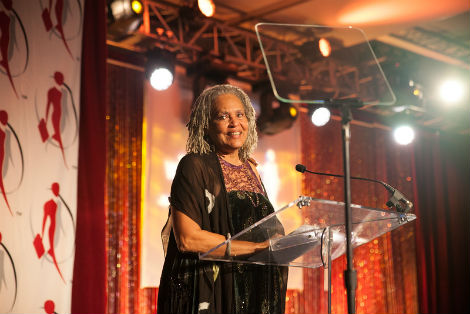 As pioneers of the world and trailblazers in what they do, the Black Enterprise Women of Power Summit’s legacy award winners of past have all been ladies that have used their strength, guts, and wisdom to light paths and open doors for those who’ve followed. Adding to the amazing list of past legacy winners, including the likes of Judith Jamison, Ruby Dee, and Maxine Waters, is esteemed journalist Charlayne Hunter-Gault. Confirmed to be donned with 2015’s Legacy award, Hunter-Gault is a Peabody and Emmy award-winning journalist.

Her career manifested in dreams of studying journalism after falling in love with Brenda Starr, a comic strip about the colorful adventures of a reporter on the run. At the top of her Atlanta High school class, growing up in the Jim Crow filled days of hate and rage toward people of color, Hunter-Gault worked with civil rights activists as a test case in their fight against integrating the school system. Pressing for admittance to the journalism program at the University of Georgia at Athens, a court case turned an initial denial to attend the college into a court-awarded admission that made her one of the first two African Americans and black woman to attend the school. Registering despite violence, shouts, firecrackers, and crowded protests, Hunter-Gault used the experience and countless press stories chronicling the drama to inspire her career as a journalist.

She went on to work for The New Yorker in administration and then the New York Times in 1968 as a reporter, where she led the Harlem bureau and pushed to end its use of the word “Negro.” In the 70s she further elevated her career to PBS working for MacNeil/ Lehrer, where she also hosted her own human rights show Rights & Wrongs.

Continually making moves, in 1997 she moved to South Africa to become NPR’s African Bureau chief which later led to a stint as CNN’s Johannesburg Bureau Chief.

Noting her amazing resume of career strides, the fabulous Hunter-Gault became the first African American to give a commencement speech at the University of Georgia in 1988. Chronicling groundbreaking experiences, her 1992 memoir In My Place hit bookshelves, followed by 2006’s New News of Africa, and 2012’s To the Mountaintop: My Journey Through the Civil Rights Movement.

Black Enterprise is proud and honored to have a pioneering woman of black America, journalism, and the world accept 2015’s Women of Power Legacy Award.