The Chew's Carla Hall From Top Chef To The Chew 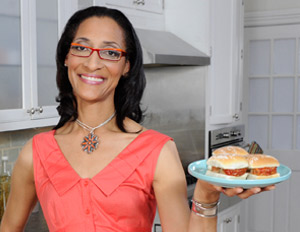 The term celebrity chef is a fairly recent addition to the American lexicon. While food is revered in many parts of the world, American tastes are just now starting to catch up. Food as a genre is exploding and just in the last few years we’ve seen new Websites, reality shows and entire networks devoted to the art of cooking. This upsurge is elevating chefs to media darlings along the same lines as actors, musicians and pro athletes. Amongst the standouts of this proliferation include the talented Carla Hall, who parlayed a catering business into a spot on Bravo’s Top Chef series and then as part of the cast of ABC’s daytime food culture show, The Chew. BlackEnterprise.com sat with Hall, who shares her view on cooking, her journey from chef to star and how the secret to her success is never forgetting to invest in her most valuable asset–herself.

How old were you when you started cooking?

I started cooking at 30. You thought I was going to say younger, right? I wanted to major in theater and attend Boston University. They didn’t accept me so I went to Howard University and majored in accounting. After I graduated, I worked at Pricewater House and then said, “I hate this.â€ I knew I didn’t like it and I didn’t want to be 40 years old and hate my job. So I quit and went to Paris and modeled.

Okay, so you’re modeling in Paris. When does food as a career enter your life?

It was in Paris when I realized I liked food. All the models would cook and eat and then debate on what went into different foods. I didn’t have a clue. Both of my grandmothers were great cooks and my father was a good cook and I was like, “This is amazing, all the socialization that happens in the kitchen and everything.â€ So I bought some cookbooks and tried to figure out what was in it. I modeled for three years then I came back to the States to live with my sister in DC and I started a lunch delivery company.

Was the lunch delivery company planned or happenstance?

I started it as a fluke. I was in Northwest DC and one of my friends from Paris moved back to DC, where she was from, and at the time I was making food for my sister’s baby shower. So my friend couldn’t make it but I told her I would bring some leftover food because she was always complaining that there was never any food in her neighborhood. And in my business mind I was thinking, Well, if she doesn’t have anything to eat then the people around her don’t either. Once a business major always one, you know. So I bring lemon blueberry bread, biscuits with smoked turkey, some random stuff and I put it into a picnic basket and went over to Kennedy St. Over there it’s doctor’s offices, hair salons, barber shops and all kinds of little businesses. And so I go inside and they’re like here’s Carla, she has a business and the people in the shop ask what’s it called and I look down at my basket and I say the Lunch Basket. They asked when I would be coming back and I was like tomorrow. And just like that it started. Within two weeks I had 14 clients and at the height of it I had 25 clients. I worked everyday for five years and after that I went to culinary school.

Some people might wonder why you decided to go to culinary school after you were already cooking professionally?

I always tell people I had the experience of cooking for people but I needed the theory. Why things worked, why things didn’t work, I didn’t know that… I used trial and error for everything. Like, why when I put my potatoes in the food processor they turned to glue. It was awesome for me to learn.

Where did you attend school and how did you transition into being a chef?

I went to L’Academie de Cuisine (Gaithersburg, MD). It was quick, a one-year program, six months in class and six months in an externship. I had a really strong work ethic so I was ready to work what they call a half a day in the restaurant business, which is 12 hours. I had been doing that for five years. After school I worked as a Sous Chef for the Henley Park Hotel [in Downtown DC].

How was the Top Chef experience? Are the challenges indicative of a quality chef?

Nobody really goes through all of that. What it does is deal with how you handle your stress. All the chefs are good. Every chef that makes it there is good. It may not always look like it, they may make mistakes, but in their own kitchen in another situation they’d be fine. It’s about how you adapt and keep your focus.