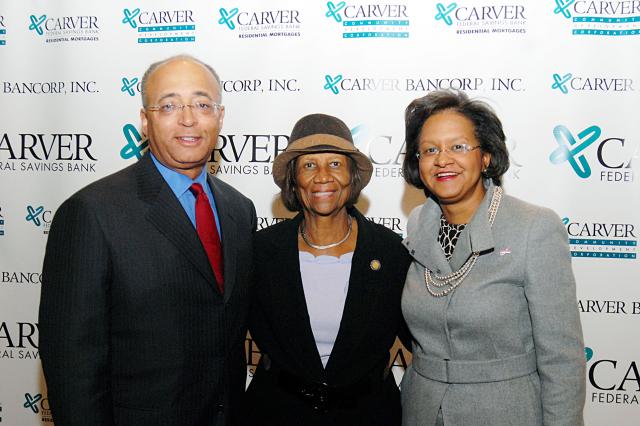 While many large commercial banks cling to life or become engulfed by the specter of death, Carver Federal Savings Bank is celebrating its 60th anniversary. Proving to not only have a propensity for withstanding economic turmoil, the black-owned bank has also sought growth opportunities during the downturn.

On Wednesday, the who’s who of New York’s political arena joined Deborah C. Wright, Carver chairperson and CEO, and more than 75 guests including Rep. Charles Rangel in a celebratory reception at the bank’s headquarters in the heart of Harlem.

“One of the reasons we haven’t been pushed around by a lot of the financial problems is because our customers are loyal to us and we’re loyal to them,â€ said Wright, who is a member of the Black Enterprise Board of Economists. “You can’t succeed if your customers aren’t succeeding.â€

As many African Americans strive to deal with the personal ramifications of the financial crisis, Carver’s duel presence as an educational resource in the black community has become more pronounced.

“I think everybody is so concerned about their finances and about debt and about understanding how credit works and their FICO score,â€ said Blondel Pinnock, president of Carver Community Development Corp. (CCDC). The CCDC has also been holding financial empowerment workshops around New York.

Inspired by African American scientist and agricultural researcher, George Washington Carver, a group of black Harlemites pooled their resources in 1948 to found the bank.Â  Though Harlem was a hub of black business and homeownership in the 1940s, access to capital was a major challenge the bank sought to alleviate. The financial institution was started with assets of $250,000 that included $14,000 in cash and the rest in pledges from community residents. By 2006, Carver’s assets had grown to $765 million.

Though larger banks continue to falter, Carver, which employs 154 people at branches in Brooklyn, Queens, and Manhattan, continues to stand firm. Carver ranked No. 1 on the B.E. Banks list in 2008.

But it hasn’t been completely immune from the credit crunch and ailing job market. Wright said there has been an increase in loan delinquencies.

“Our basic business is commercial real estate and churches, and for the first time we’ve seen contributions at churches go down, so they’re under a little stress,â€ Wright explained. “We’re seeing landlords stressed out because they’re losing tenants. The main thing is we underwrote those loans in a very conservative way, and we have confidence that they’ll pull through.â€

For the third quarter ending in December, Carver’s total assets dropped to $790 million from $796 million in year-over-year figures. Deposits dropped to $621.5 million, a 5% decrease compared with the same quarter in 2007.

But Carver, the largest black-owned financial institution, is

Briefing on the New Strategy for Afghanistan and Pakistan