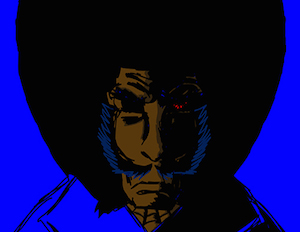 Cartoonist Justin Serrette Jr. is a pretty accomplished creator with projects such as “Alienz Wit’ Afros” earning more than a million views on YouTube.

Now, the controversial animator is developing a cartoon series around two runaway slaves called “Mortolkosbei.” The plot finds the escapees struggling to fight for their freedom and become cyborg ninjas to stave off enslavement. Their move to digitize themselves finds them in a precarious situation as they are then forced to enslave their future descendants named Mortolkosbei.

Serrette Jr., who infamously backed Aaron McGruder’s “Uncle Ruckus” movie, is doubling down on his project by developing a fighting video game called “Mortolkosbei Mugen.” The title is said to be similar to NetherRealm’s “Mortal Kombat”Â with players able to utilize a plethora of combos, finishing moves, and characters.

The series will find viewers taken back in time to the 1600s then blasted into the early 1900s during the renaissance of Black Wall Street. It is there where the runaway slaves befriend a brilliant inventor who helps to build them into the ultimate killing machines. If MortolKosbei sounds familiar to fans of Serrette’s series, it is because the character first appeared in the “Alienz Wit’ Afros” YouTube series.

Inspired by the historical events of Black Wall Street, Serrette commented on his controversial series, saying, “When I first read a book on Black Wall Street it shook me to the core. They won’t teach this in history class. In Mortolkosbei, you’ll learn a lot.” With the premise of edutainment embedded in the animated series and video game, Justin Serrette Jr. aims to create a maelstrom of information by using his intellect and imagination.

For more information and screenshots for both the cartoon and video game, please check out Crazy Afro Animation.

Cool Jobs: Comic Illustrator Talks Art and Race in the World of Superheroes