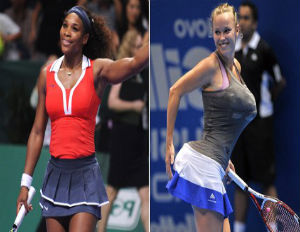 While Serena Williams declined to comment on Danish tennis player Caroline Wozniacki’s impersonation of her at a recent tennis match in Brazil, others are calling the stunt racist.

Wozniakcki played last weekend in Roger Federer’s Tour in Sao Paolo, Brazil, and even Federer could be seen laughing when Wozniacki came out on the court, strutting around as Williams withÂ padding in her shorts and top. Serena also participated in the event.

Though Wozniacki declined to comment to ABCNews.com, her rep said, “It was all in good fun as Serena is one of her closest friends on tour.â€

Sherri Shepherd, co-host of the View said on the show Tuesday: “I know they are friends, but still, inside it does something to me, because we’ve been made fun of for so long for different parts of our bodies. And to see Serena Williams reduced to this, I don’t like it.â€