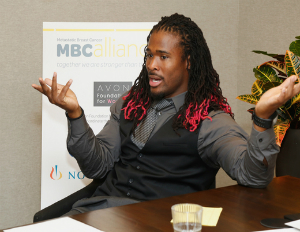 October marks National Breast Cancer Awareness Month. Perhaps no one is more aware of the ravages of this deadly disease than Carolina Panthers’ running back DeAngelo Williams.

Black Enterprise spoke with the football player to learn more about his efforts to educate others about metastatic breast cancer.

BlackEnterprise.com: What prompted you to start raising awareness about breast cancer?

DeAngelo Williams: The BRCA1 gene runs in my family. My mom and my four aunts all died of breast cancer. My eldest aunt died in 1992. She was diagnosed at 27 and died at 32. My mom is the only one who lived past 50 — she died at the age of 53. She was diagnosed in 2004 and then it metastasized to her liver about three years ago. She ultimately died in May because of the cancer in her liver. My other four aunts also died of metastatic breast cancer. So the cancer in the breast isn’t what killed them, it was the fact that the cancer had traveled to other organs.

BlackEnterprise.com: What are some things you’re doing to raise awareness?

Williams: My mother was the inspiration behind the movement within the NFL to wear pink for breast cancer awareness. We raised over $300,000 for Susan G. Komen. I’m also working with The Metastatic Breast Cancer Alliance to raise awareness. And I will continue to offer my time and effort to those who need it.

BlackEnterprise.com: How can others raise awareness?

Williams: Get your breasts examined. Be aware of your body. If anything doesn’t feel right in your body, it’s important that you go and get it checked out.

BlackEnterprise.com: What would you say to someone who is afraid to get cancer screening?

Williams: Early detection is the best prevention. That’s better than finding out too late.

Consumers Cut Back on Spending