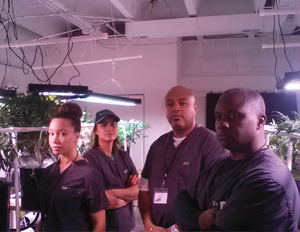 The legalization of medical marijuana is taking over the United States. Oregon, Washington, and Colorado have seen massive tax gains from legalizing recreational use while California’s medical system continues to be a model for other states. Twenty-three states and the District of Columbia currently have made it legal, and it is pending in fourteen more.

Med-X, Inc. (Med-X) is looking to capitalize on the expansion of this industry, by providing safe and healthy cultivation practices and education to consumers. Med-X, based in Los Angeles, is actively pursuing an equity crowdfunding campaign, the first cannabis-related company to do so via a new rule under the JOBS Act known as Regulation A+. Med-X has been qualified by the United States Securities and Exchange Commission to sell shares to the general public. The management team is seeking $15 million for 21% of itsÂ company.

“We are offering this chance to reserve shares through an equity crowdfunding campaign to give all Americans the chance to be a part of a positive phase in the rapidly evolving cannabis industry,” said Dr. David Toomey, CEO of Med-X in a statement. “We see tremendous growth potential for the industry at large with both medical and recreational users, as well as a tremendous need for products that the public can trust not to be contaminated with pesticides, mold, or other problematic substances.” www.startengine.com/startup/med-x

Crowdfunding makes it a lot easier for cannabis startups to access the capital needed to grow their business. But of equal importance, it helps everyday investors participate in the enormous upside potential within the cannabis industry, according to the CFN Media Group.

“I like the idea of crowdfunding, as the cannabis industry is starved for capital. For it to succeed as a funding mechanism, the company has to merit investment,â€ states Alan Brochstein, CFA, of New Cannabis Ventures, a news and information platform. He warns investorsÂ of the risk with Med-X’s cannabis crowdfunding campaign because the companyÂ appears to be focused primarily on raising a large amount of capital rather than running the business. “All of this money will be spent within two years, and it seems implausible the company will be worth more than the total raised, which is $13mm,â€ he reports.

Opportunities for African Americans in the legal marijuana industry will be explored at Black Enterprise’s Entrepreneurs Summit (May 4-7) in Miami Beach. The session, “The Green Rush,â€ will feature a panel of cannabis angel investors, cultivators, and entrepreneurs.

‘Barber to the Stars’ Talks Passion for Good Grooming

Save For Your Kids’ Education Without Panicking