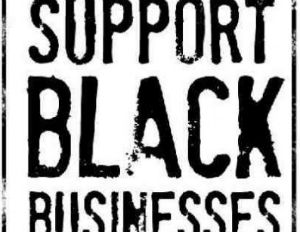 If American blacks harnessed their spending power, they’d have the GDP of the 16th largest country in the world, according to Norm Bond, president of the National Alliance of Marketing Developers.

How can the African-American community harness that power? Mr. Bond says the best way is to start locally. With new apps such as “Around the Way” hitting the marketÂ and black business directories in all the major U.S. metropolitan areas, it’s easier than ever to Buy Black. There really are no excuses.

“This is our eleventh year doing this,” Bond says. “It used to happen on a Thursday evening after work from 6 to 10, but three years ago, we realized we needed to expand so we moved it to a Saturday and made it a full day from 10am to 6pm. We also added events like panel discussions, fashion shows.”

“As the largest African-American owned business in the region, we believe that it is our responsibility to reinforce the importance of supporting African American and other minority businesses. Our support makes good business sense and helps to create jobs,â€ Harold Epps, CEO of PRWT, said in a press release.

The Philadelphia African-American Chamber of Commerce will be on hand as well.

While the aim of this expo is to encourage African-Americans, and other groups to spend more of its dollars within the black community, the aim of the NAMD also includes making businesses from other communities aware of the power of the African-American consumer market, and to teach them how to market to it.

Back in the fifties, when the NAMD was formed, a lot of the members of the non-profit organization were the blacks who controlled the budgets at white corporations for “the negro market.”Â  The NAMD helped corporations realize that there is a black market, separate from the general market and showed companies how to market to blacks.

As chronicled in the book “The Real Pepsi Challenge” by Stephanie Capparell, in 1940 Pepsi’s president, Walter Mack, hired Herman Smith, an ad man “from the Negro newspaper field” to promote Pepsi in African-American communities. The campaign was so successful it boosted Pepsi’s earnings and market share, helping them edge out Coca-Cola and the African-American consumer market was born.

The NAMD still advocates on behalf of the African-American consumer putting out a document every year called the NAMD Urban Consumer Market Report, a 200 page research report Â which includes research data on where the urban consumer is spending their money. It includes industries, geographic data, population data and more.

“A lot of people today don’t realize the importance of specifically supporting the African American,”Bond says. “As the older black marketers are retiring from big white corporations, they are being replaced by folks in their twenties who aren’t familiar with NAMD, and a lot of the big companies have shifted their dollars from the African-American market to the Hispanic market. They’ll say, we still have 5% we’re spending with minorities on marketing, but lets give it to the Hispanics this year.”

Bond says Byron Lewis of Uniworld says not only have advertising dollars shifted from the African-American market to the Hispanic market, black advertising professionals are urging marketers to stay away from the word “urban” and to instead say “black” because that will keep the advertising dollars in the black community rather than the more ambiguous “urban” community.

The BUY BLACK Holiday Shopping Expo will be held at First District Plaza, 3801 Market Street in Philadelphia  from 10am -6pm. Admission is Free.