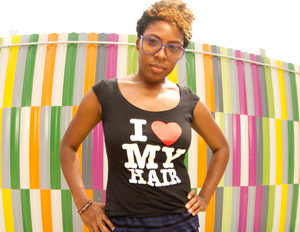 Growing up in New York City, Kissa “Starrâ€ Thompson developed a passion for fashion and individuality at a young age and always knew she would one day make a living pursuing her love as her own boss. In an attempt to go the straight and narrow route, she enrolled at FIT to study fashion business merchandise and held down a job at Spin magazine as an advertising sales assistant. However, when she realized that her dreams couldn’t be achieved by working for other people, Thompson decided to get hands on experience by launching her company, Buttafly Unlimited, once her second year in school was complete in 2000.

“There’s a lot of times when you work at a job and it’s not really where you want to go or you don’t see yourself really going anywhere with it,â€ she explains. “For me, I had some goals for myself and my company, and I was like, when I had reached this certain goal I want to make the step out on my own. Because working at Spin, I just didn’t see where I could go from there, so I took the risk on myself.â€

During the early years of Buttafly Unlimited, Thompson held down 9-to-5 jobs at various places like Def Jam, BET, Burberry, and as a personal assistant to a well-known celebrity. While she never actually hated anywhere she worked, Thompson knew that her brand was more important and used contacts and her coveted positions to learn the ropes.

“When I started [Buttafly] and started freelancing for other companies, I used it as a opportunity to learn and to grow,â€ she says, adding that one of her biggest lessons learned was to always seek funding for a business venture. “I think every experience, depending on how you take it, can take you to the next level. It’s not in vain depending on how you used the time, so for me, when I’m in a situation where I’m freelancing for another company, I use that as a learning opportunity and I’m getting paid for it.â€

Today, Thompson’s brand specializes in hats, scarves and T-shirts for men, women and kids that range in price from $22 to $30. Buttafly’s most popular shirt, “I Love My Hair,â€ was inspired by her own experience with going natural. “I had turned 20 and decided to cut all of my hair and it was really short, so when I did that my grandmother was like, ‘Do something with your hair,’â€ Thompson muses. “She just wanted me to have it long and straight. She’s from the old school and you can’t argue with her, so I said I’m going to have a shirt that says, ‘I Love My Hair’ because I was tired of arguing with her.â€

As for the actual design, Thompson credits a graphic designer friend for inspiring the final product, which has since been seen on celebrities like Alicia Keys, and is sold on Buttafly Unlimited’s website, as well as boutiques in New York, London, Atlanta and Japan. Her newest design is a T-shirt geared toward men that reads, “I Love My Beard.â€ “A lot of people ask us to do, ‘I love’ this and ‘I love’ that but [My Hair and My Beard] are the only two ‘I Love’ shirts we’re going to have in our T-shirt collection,â€ she says. “A lot of guys get a hard time for having a beard but it’s a natural thing, so it’s a statement to guys to just let themselves be.â€

Making statements and teaching people how to embrace them selves is what Buttafly Unlimited is all about. Nearly 12 years since launching, the brand has expanded to “I Love My Hairâ€ self-esteem building workshops in New York City, where parents and their children participate in creative activities like T-shirt making and learning lessons about maintaining natural hair, as well as a documentary and a supplemental cartoon and book geared toward promoting individuality.

“The acronym B.U. is about being who you are and reaching your unlimited potential. Even though you’re different or you want to do something different or sometimes you thinking you want to do something different and you change who you are, it’s okay,â€ says Thompson. “Once you own who you are, and accept it your world opens up when you stop following somebody else’s. So for us, whether it’s your style or the way you do things, whatever makes you unique, just celebrate that and that’s pretty much what my mission is. Celebrate your uniqueness, just do you.â€