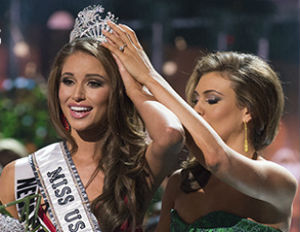 But critics question Sanchez’s eligibility, claiming that she isn’t a Nevada native and wasn’t eligible for the state’s pageant. They say she failed three times to win the Miss California crown, before eventually winning the Miss Nevada competition in January.

The brewing controversy takes us back to September 1983 when Miss New York, Vanessa Williams was crowned Miss America — The first African American to wear the crown since the contest started in September 1921. Williams was forced to give up her tiara, but went on to bigger and better things.

Throughout the history of these pageants, after the spotlight turns off, some past contestants have led lives of depression, eating disorders, and sometime suicide. So which ones are now thriving and dominating their respective fields?

Starbucks to Help Thousands of Workers Pay for College Education

Investing in Africa: Why Are Minority Business Owners Slow Rolling?