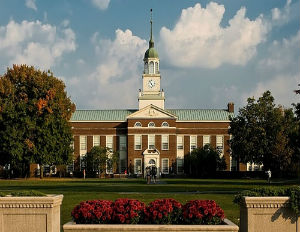 Bucknell University President John Bravman has expelled three students for the racist comments they made over a campus radio broadcast on March 20th.

While Bravman did not identify the students involved in the racist radio rant, he did share the comments made by the students on WVBU-FM in “the interest of transparency and candor.” He said one of the students used the N-word, a second student said “black people should be dead” and a third student said “lynch ’em.” On Tuesday, Bravman met with about 1,000 students and staff members from the private college in Pennsylvania to address the issue and make it clear that such behavior is not tolerated by the university.

“Their conduct is an affront to our values, damaging to our community and in clear violation of our community standards,â€ he wrote to students, faculty and staff in a late night email Monday.

Bucknell spokesman Andy Hirsch said an inmate at a nearby prison heard the comments and reported them to a prisoner advocacy group, the Lewisburg Prison Project. The group then contacted a university faculty member who forwarded the report to the radio station’s adviser.

Hirsch said the university investigated the case and the students were suspended and interviewed before the dean of students expelled them.

Bucknell is a small liberal arts college in Lewisburg, Pennsylvania with a population of about 3,600 undergraduates. Its student body is 79 percent white, 5 percent Hispanic, 4 percent Asian and 3 percent African American.

With similar acts of campus racism being made public in recent news, do you think black students should put greater weight on diversity numbers and a school’s history before saying yes to a college? Read our interview with DeEtta Jones, who’s an expert on diversity and inclusion in higher education here and sound off with your opinions in the comment section below.

Education Outcomes Improving with No Child Left Behind Waivers