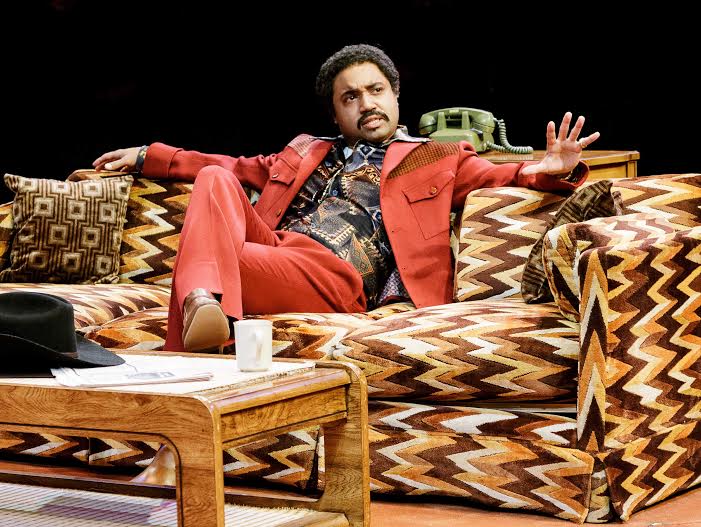 As is the case with many sports fans from Chicago, the matter of his baseball fanhood is a complex question for Francois Battiste.

“I should be a White Sox fan because of where I’m from geographically,â€ Mr. Battiste, who is from the South Side, said recently. “But when you’re growing up you identify with players more so than you do a team. So I grew up wanting to watch Shawon Dunston, so I became a Cubs fan.â€

It’s with that understanding of a connection players have with a fanbase that Mr. Battiste will play the roles of Elston Howard and Reggie Jackson in the new play Bronx Bombers. Mr. Battiste played baseball all the way up to his senior year in high school. “It’s something that matures with you even though I’m a father and husband … I can literally go somewhere and park my car and watch a Little League game. I get as much enjoyment out of that as I do if I’m watching a high school game, college or the pros. It is a game that you will never master.”

Previews begin next week, and mastery seems like a safe bet for Mr. Battiste, one of the most critically-acclaimed actors working on Broadway today. “When we first met Francois, what he first did was read for the part of Magic Johnson,” in the play Magic/Bird, said producer Fran Kirmser. “He was breathtaking — and obviously too short to play the role which was devastating.

“He is phenomenal and just so knock-out of an actor and a person,” Ms. Kirmser continued. “We knew out of the gate with this piece that we wanted to work with him again. It was really written for him to do. With him you get every nuance of the character. He’s crystal clear in his storytelling. There’s never a question as to what he’s saying.”

But for Mr. Battiste, 36, research for his roles have taken the actor down an emotional and rather personal road, one he hopes comes across in his two roles on stage.

“I figured out that the general manager of the Yankees, George Weiss, said while he’s GM no nigger is ever going to wear the pinstripes. And it’s like, OK, so that’s why it took you guys eight years to sign an African American to join your team.â€

In the play, Mr. Battiste portrays Elston Howard, the first black Yankee, who joined the big league club in 1955. Mr. Howard endured much of the crushing discrimination the first wave of black major leaguers went through during his time playing for the organization. It’s a story the creators of Bronx Bombers aren’t shying away from, one Mr. Battiste is taking rather seriously.

“He had a hell of a time getting to even play his natural position,â€ Mr. Battiste said, alluding to the most cerebral position on the field, catcher. “He already has the numbers to be in the Hall of Fame. Why he’s not being recognized is something I don’t understand.â€

Mr. Howard died in 1980. “There’s something that’s burning inside of him,â€ Mr. Battiste said of playing his character. “The fact that he wanted to be the manager of the Yankees — Steinbrenner said he was too good to be manager because they’re hired to be fired. But the fact that he wanted to be manager and he made it known but was never given the opportunity says something about him.â€

Mr. Battiste said that lines in the play give Mr. Howard’s voice and legacy a dignity in light of his story against the more infamous narrative of Jackie Robinson, the first black player to play in the majors. Mr. Battiste also plays Reggie Jackson. “He came to the Yankees in ‘77 knowing that he was a champion. He demanded a certain amount of money that he got, and he had the ego to match it.

“He also had intelligence and this incredible athletic prowess. He had that ex-factor of delivering on the big stage, so he was The Man and he let it be known. There was also this underbelly of sadness, a kind of loneliness quality to him. But he’s an important figure [in Yankees lore]. He could have chosen to be in the Hall of Fame as an Angel, but he decided to wear the pinstripes. That says something about the essence of being a Yankee and I think Reggie understood that.â€

Mr. Battiste worked with Bronx Bombers director Eric Simonson in Magic/Bird. His casting was on invite from the producers and directors, who were also attached to Magic/Bird — in which Mr. Battiste played Bryant Gumbel, amongst other characters. The closing of the play was emotional for Mr. Battiste; his son, Toussaint, was born on Saturday, May 12, 2013, the same day the play closed. He missed the first performance that day, but with his wife’s permission performed in the evening show. “It was surreal,â€ he said. “At the end Tony [Ponturo] told the entire crowd and they all stood up. It was one of those things you’ll never forget.

“It was a fun project and we had some amazing people associated with it,â€ Mr. Battiste said of Magic/Bird. As a basketball fan myself, it was fun to be a part of it. We fostered a lot of relationships, it was one of those circumstances that you wish we had more time to flesh out in the rehearsal process. But it was still a great opportunity. That’s a story that’s still captivating in terms of what it meant not just to the NBA but to America.â€

Mr. Battiste starred the critically acclaimed off-Broadway play Taking Care of Baby at the Manhattan Theater Club, a project he described as “very demanding.â€ Now, he’s looking forward to an opportunity which affords him the chance to illuminate on stage one of the most storied sports franchises in the world.

“As an actor you don’t always get to choose your work,” Mr. Battiste said, adding that black actors have it even worse. “You’re happy when something comes along that you’re excited about, or it’s an ensemble of actors or a director that you can’t wait to work with. I just happen to be lucky. The subject matter happens to be something I care about. I’m doing it with people that I care about. When those two things come together it’s a pretty beautiful thing.â€

“What’s important to me is when I see other shows to see actors and you don’t want them to leave the stage because they so mesmerize you. That’s what Francois does. It’s like, ‘No, don’t leave! Come back!’ He has that presence that any actor should covet and that theatergoers want to appreciate.”

On to the Next One: Jadeveon Clowney Signs With Agent Bus Cook