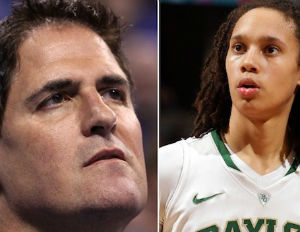 There’s a debate going on in sports business circles: Is Mark Cuban serious about drafting Brittney Griner? The answer is yes.

This is explained rather easily. Cuban is first a businessman. This means he takes risks, understands the importance of standing out from the status quo, and likes making money more than he likes money itself. So the notion that he was just blowing smoke is, well, kind of disingenuous.

Here are a few reasons why he may just be smarter than all us.

1. Generally speaking, women are a more important consumer base than men. Several studies say that men spend more than women — so much to the extent that it could be considered common knowledge — but those same studies suggest that women spend more on family-related expenses, personal care and (of course) clothing. Signing Griner opens the NBA and the Mavs to a new audience and Griner’s presence as a breakthrough athlete would be indispensable.

2. She could have a potential higher ROI than what may be on the board. “If she is the best on the board, I will take her,” Cuban said before the Mavs’ Tuesday night game against the Los Angeles Lakers. “I’ve thought about it. I’ve thought about it already. Would I do it? Right now, I’d lean toward yes, just to see if she can do it. You never know unless you give somebody a chance, and it’s not like the likelihood of any late-50s draft pick has a good chance of making it.”

He’s right. Go ahead. Look at the drafts over the years and see how many late-rounders you recognize. There’s a reason for that. The players simply do not pan out frequently.

3. Summer League would make more money than ever. With Griner playing games in the summer league, it would not only gain the most media attention ever, but sponsorship dollars, and marketing opportunities would skyrocket for the league. This really can’t be understated.

4. The move would make Griner an international sensation. Women’s sports — especially professional basketball — are a far more important entity than in the U.S. That, factored with the worldwide popularity of the NBA, could potentially spark the perfect storm of international growth the NBA so desires.

The only downside is that outgoing commissioner David Stern would have Cuban to thank. And we know how that would work out.

5. A talent like Griner only comes along once every generation. There’s no more elemental fact of this potential relationship than this. Sure, Cuban could be just bringing attention to himself, but the fact that we’re even having this conversation is because of Griner’s physical attributes (she’s almost 6’9″!), has supreme athleticism and a reputation as a winner in college. Yes, it’s an unconventional idea. So was the sale of Broadcast.com.

Some Concerns With Possible Omissions in Jackie Robinson’s ’42’