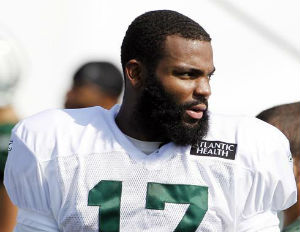 You would think he would have learned the first time.

This isn’t the 29-year-old wide receiver’s first run in with baby mama drama. He was sued in 2010 by former America’s Next Top Model contestant Nik Pace for siring a child and not supporting it financially. Pace initially wanted $70,000 a month, but the two eventually settled out of court for a lesser amount. Now, Edwards finds himself in the same situation with striking fashion blogger Ashton Whittington. She claims that he is the father of her 18-month-old son Ashton Arthur Whittington.

Edwards has a had a solid career. He came out of the University of Michigan an All-American and entered in to the NFL as a third-pick in the 2005 draft.

But, his love of beautiful women is taking a toll on his wallet.

Read more at the New York Post on what he’s doing to own up to his responsibilities.

I’ll Be Missing You: How to Handle Workplace Grief

Did Samuel Jackson Drop the F-Bomb on Saturday Night Live?