Advice From Black Geek Entrepreneurs to Their Younger Selves

Before geek became chic, it was just another synonym for outcast. So as a blerd—a black nerd—maintaining a career, that in most cases you had to build from the ground up, would be a formidable task requiring singular focus and carefully laid plans. One would assume this was the case if you look at Black Girl Nerds and Universal FanCon’s Jamie Broadnax or Black Nerd Problems’ William Evans.

But these examples of success come with lessons that they would have gladly been given a heads up on. Here are some of the lessons they and others in the geek market have learned along the way. “Do not compromise your voice or interest because you think people won’t get it or care.” —William Evans, Black Nerd Problems

William Evans, the editor-in-chief and co-founder of Black Nerd Problems, collaborated with friend Omar Holmon when they realized that the lack of representation in the geek market wasn’t confined to the source but also reflected the lack of diversity in coverage and consumers speaking out. So they recruited other like-minded individuals to make their voices be heard.

“Being a geek can be isolating because we compare our interest to the general population, but we sometimes don’t know that there are huge communities that share our interest and passions. They just aren’t always in our class at school or neighborhood. But seeking out a community that is invested in the nerd stuff that you are is one of the best parts about being a geek.” “Make sure that your con and concept represents your passion.” —Hilton George, BlerDCon

Hilton George is the founder and con-chair of BlerDCon, the annual convention celebrating the contributions of blerds to the geek community. Attending cons and not seeing them reflecting the diversity of the audiences that watched them inspired him to start BlerdCon.

“Go to as many cons as you can and have as much fun as you possibly can. For anyone considering building a convention, it is not for the faint of heart. So you’ll need a motivation that is bigger than yourself to get through the birth pains of bringing a con about.” “When you’re doing something you love not only will the setbacks seem smaller, success will find you in ways that you can’t begin to imagine when you start your journey.”—BenHaMeen, Fanbros

BenHaMeen, co-founder and executive producer of the award-winning Fanbros podcast is a multitalented creative that hasn’t met a medium he didn’t like or master. “Build a community; have an audience that respects your work and respects your brand and wants to help you.” —Jamie Broadnax, Black Girl Nerds

Jamie Broadnax, founder of Black Girl Nerds—the critically acclaimed portal for female nerds of color—has added con founder to her ever-expanding résumé. Broadnax is the co-founder and community director for the newly created Universal FanCon, which will take place in 2018 and she credits listening to her community as a big reason for her success.

“When your audience is telling you to create something, you need to go out and do it. So that’s the advice I would give, create things based off of the demand of your fans and they will support that. They will give you exactly what you are asking for whether they support you financially or by word of mouth. But you definitely have to follow through.” Tatiana King-Jones is a host on the Fanbros podcast and editor-in-chief of the accompanying website. While she might be hesitant to give out advice to her younger self for fear of poisoning the timeline she would encourage herself to believe in her power.

“I’d tell my younger self that I am enough. That my ‘odd’ interests, atypical perspective, and passion for geekdom is my purpose. I’d tell myself that the things I love, no matter how uncomfortable it may make me feel for being the ‘other, other’ in my circles, will actually be what makes me the most successful. I would tell myself never to dim her light or try to be like everyone else—because you’re not like everyone else—and that’s what makes you incredible.” “Make sure your beginning is in a place that’s manageable.” —Jason Richardson, J1-Con

Jason Richardson, founder of J1-Con, Philadelphia’s first anime convention, would advise his younger self to make sure to start with a solid foundation.

“Be careful with where you begin your business. The place where you start is your bottom, and you can never fall below that line. Look at your heroes and not just where they are, but how they got there, as well as what they went through to become the heroes you know them as.” “We’re all superheroes; we all have powers that lay untapped. And once you unlock yours, there is nothing stopping you.” —Jacqueline-Elizabeth Cottrell, Noir Caesar

Jacqueline-Elizabeth Cottrell is entertainment manager and spokesperson for the black-owned media company Noir Caesar. The brainchild of NBA player Johnny O’Bryant, Noir Caesar aims to give creatives of color a platform to showcase and distribute their work. Jacqueline’s history as a writer, model, and content creator in the geek market, as well as her belief in their mission, made her a logical choice to be the new company’s ambassador. While her path hasn’t always been easy, it was her dedication to it that lead to her opportunities.

“Don’t give up. Don’t let anyone force you into a box. Don’t let anyone call your blackness into question because you would rather watch InuYasha or read Angel Sanctuary as opposed to just regular comics. And don’t sell your own talent short. Be grateful for the gifts you have no matter what. You have been given the power to create, and I believe that is one of the most astounding superpowers you can have.” “Everything is based on relationships.” —Maj Mack, Goboiano

Maj Mack, founder of anime culture lifestyle Goboiano is still learning as he goes. But one important lesson he learned early on was the power of friends and fostering relationships.

“I think the most important thing I’ve learned throughout the process would be building a network early. Relationships are the key to progressing whether in advertising, hiring, fundraising, whatever. I had an idea, but didn’t really understand until jumping in how important it is for moving forward.”

PR Pro: Why We Shouldn’t Look to Hollywood to Tell Our Stories 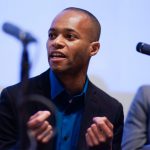