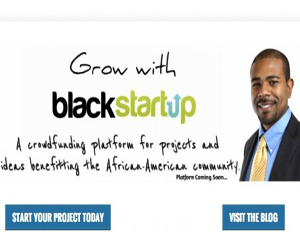 While many aspiring and new African-American business owners have the passion and drive to get their company off the ground, there are overwhelming challenges that come to play once funding-time hits.

A CB Insights report that tracked founders of 165 companies that had received a first round of venture funding during the first half of 2010 revealed only 1% were African American, despite 11% of the U.S. population being black. Meanwhile, 87% of founders who obtained funding were white, and 12% of the startup founders were Asian.

Equity crowdfunding legislation has simplified the funding process for many entrepreneurs, and business owners have been successful with crowdfunding sites like Kickstarter and Indiegogo, among others.

A group of Morehouse College alums, and brothers of Omega Psi Phi Fraternity, Incorporated, wanted to help other entrepreneurs on their quest for funding. They created a new crowdfunding site, BlackStartup.com .

“The companies will use the site as a crowdfunding platform, and BlackStartup.com also has resources and a blog to support business owners. CEO Nate Bennett Fleming, who is an adjunct professor of law at the University of the District of Columbia’s School of Law, researched crowdfunding and African-American business, determining that while African Americans have a lot of business ideas, they often lack the access to capital to get the ideas off the ground.

‘I wanted to create a solution to address that problem,’ he said. ‘At this point, we do the crowdfunding and address increasing access to capital and as we expand, we’ll create partnerships with on-ground organizations that look to encouraging entrepreneurship and support entrepreneurs to help with mentoring.’â€