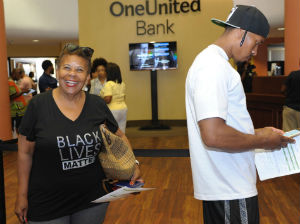 Hundreds of people turned out to open new bank accounts at OneUnited Bank‘s “First-time Account Openingâ€ event this past Saturday, July 23, 2016, at its Crenshaw Branch in Los Angeles in partnership with #BlackMoneyMattersLA.

OneUnited is one of the largest of the black banks that’s also a Community Development Financial Institution (CDFI), and the first black Internet bank.

Before the event even began, hundreds of attendees lined up to open a new savings or checking account and take the #BankBlack Challenge–an initiative aimed at empowering the black community to takeÂ control of its wealth byÂ investing in one of the 23 black-owned banksÂ in the U.S.

Teri Williams, president and a member of the board of directorsÂ for OneUnited Bank said the institution was thrilled at the attendance and said, “I’d like to thank the LA community and #BlackMoneyMattersLA for your support. This is the most exciting money movement we’ve seen in our community in 20 years. We’re looking forward to the BankBlackMiami event on July 30th and #BankBlackBoston in August.â€

Attendees joined thousands of people across the country in an effort to put money into the black community throughÂ #BankBlack. The movement got national attention on July 8, 2016, when rapperÂ Killer MikeÂ implored the black community to deploy a portion of its financial resources to make a tangible difference during a town hall meeting on BET and MTV.

“IfÂ 1 million people open $100 savings accounts, we could move $100 million. It gives us a seat at the economic table and begins to show that black money matters,â€ says Williams.

The final numbers aren’t in yet, but at Atlanta’s Citizens Trust,Â alone, 8,000 people reportedly took the challenge, bringing in an estimated $800,000 in deposits to the institution in five days. Celebrities,Â such asÂ Solange, Jessie Williams, Alicia Keys, BeyoncÃ©, Queen Latifah, Usher,Â and more, have joined the conversation urging black Americans to move their money to black-owned banks.

“The black community has annual spending of $1.2 trillion. We have the resources to build wealth, however we simply have to be more purposeful with our money,â€ says Williams.

To participate in the #BankBlack Challenge from anywhere in America, go to www.oneunited.com/bankblackchallenge, open a $100 new savings account, and challenge 20 friends to do the same.

Every Student Succeeds When Schools are Funded Fairly