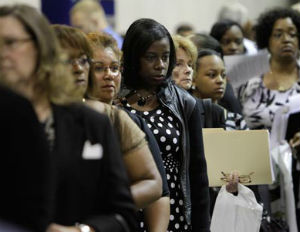 The national unemployment rate rose slightly from 8.2 percent to 8.3 percent in the month of July, according to the Associated Press.

While U.S. employers added 163,000 jobs last month, the highest amount since February, there are still over 12 million Americans unemployed.

African Americans, who have the highest unemployment rate of any ethnic group in the country, saw their overall number drop slightly from 14.4 percent to 14.1 percent. Another sign of good news was black teen joblessness which dropped from 39.6 percent to 39.3 percent.

President Obama is hoping that the country believes he can put them back to work. Since he took office, the unemployment rate has never been lower than 8 percent. It is the longest stretch for any president on record.

Read more at the AP