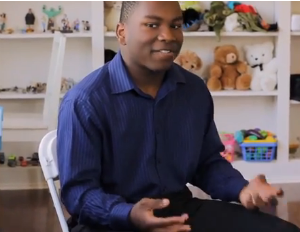 In the first installment of Colorlines newly launched series, Life Cycles of Inequities: A Series on Black Men, filmmaker Andre Robert Lee and writer Kai Wright talk to eight Oakland teen boys about the challenges they face within the classroom and how they’re constantly working to defy the stereotypes as black male students.

Publishing content monthly on the experiences of black men, Wright describes the new series as one that will be a “package of content focused on a life stage or event that for black men in the United States is uniquely confined by broad, societal inequities.”

The idea of the series came about following the death of 17-year-old Trayvon Martin and the continuous discussion that takes place about the experiences of black men in America. The video below shows young black boys opening up about the discrimination they face from teachers and peers in school and how they handle being stereotyped on a daily basis.

“I felt like as teachers they had internalized the belief that because I’m black my expectations of the type of work that I could do was less than some of the other students,” one student name Vaughn expressed. “So when I walked in the room they automatically thought the work I was going to do maybe wouldn’t have been as articulate or as progressed as some of the other kids just based off the way I looked.”

Vaughn and the other young men in the series go into detail about being disciplined differently in the classroom, being judged based off how they speak and being boxed in academically.