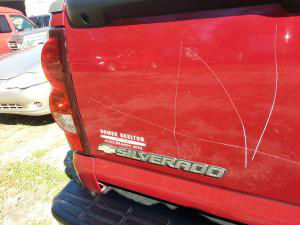 Even though the University of Mississippi elected its first ever black homecoming queen this year, racial unrest is on the rise at the historic Southern institution.

Jamal Woods, a 19 year-old African-American freshman, was racially attacked on the school’s campus; and now two civil rights organizations, the Southern Christian Leadership Conference and Operation PUSH, are offering a $1,000 reward for information about the crimes. The FBI has become involved in the investigation as well.

Woods became theÂ target of racist taunts that began in August.Â  Someone wrote racial slurs on his dorm room door that read, “Blacks are known to steal,â€ followed by profanity that was scrawled on his door along with smeared lotion and two playing cards.Â Woods asked to be transferred to another dorm because he feared for his life.

Then on November 5th, Jamal Woods’ truck (pictured) was vandalized.Â  The tires had been slashed and the hood had the letters “KKKâ€ scratched on to it. The words, “Go Home,â€ had been carved on to the side of the truck, and the tailgate was scrawled with the n-word.