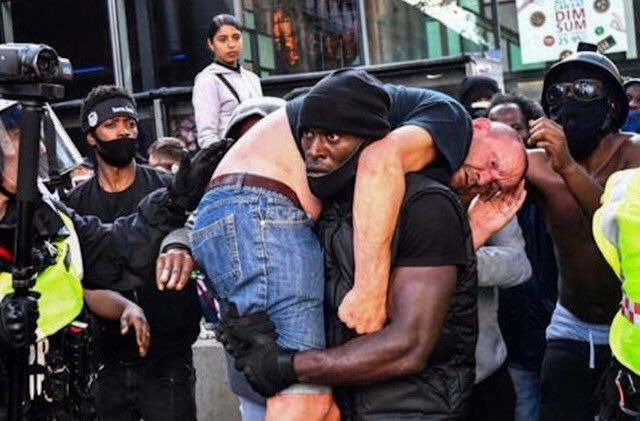 A Black man in London attending a Black Lives Matter protest was seen carrying a white man, who was believed to be a far-right counter-protester, away from danger to protect him from other protesters as a fight broke out, according to CNN.

Patrick Hutchinson and four other Black Lives Matter protesters said they witnessed a fight breaking out at the top of the stairs by the Southbank Centre, near the Waterloo Station.

Hutchinson told CNN earlier this week that he had helped the white man because he didn’t want any distraction from the purpose of the Black Lives Matter protest.

“My real focus was on avoiding a catastrophe, all of a sudden the narrative changes into ‘Black Lives Matters, Youngsters Kill Protesters.’ That was the message we were trying to avoid,” Hutchinson told CNN.
Hutchinson said he saw the man lying in a fetal position surrounded by protesters and it never crossed his mind the man may be for or against the movement, but he just wanted to get him out safely.
“I have no idea who this man was. All I know is that he was there, up to no good, let’s just say,” Hutchinson told CNN. “He wasn’t here to support Black Lives Matter.”

“If the other three police officers who were standing around when George Floyd was murdered had thought about intervening like what we did, George Floyd would be alive today.”

Patrick Hutchinson, who was pictured carrying a protestor to safety at violent demo says what happened. pic.twitter.com/IdTT8spuG4

Hutchinson saw the man, he said he and his friends formed a cordon around him and Hutchinson scooped him up to take him directly to the police. While they were marching, the man could still feel people trying to hit him, Hutchinson said.

“I am carrying him, my friends are protecting myself and the man on my shoulder. He was still receiving blows, you can feel people trying to hit him,” he said. “There were people trying to protect him at the same time carried him over to the police and I said here you are. One of them said ‘thank you – you did a good thing there.'”
He also said people from all over the world, including police officers, can learn from this.
“Just because somebody’s up to no good, doesn’t mean you have to kill them,” he said. 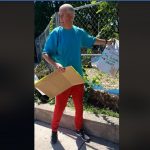 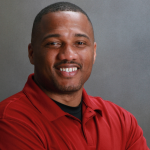