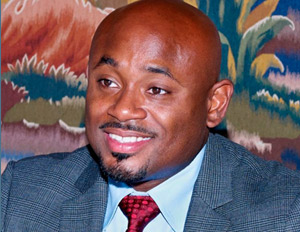 June is Black Music Month, and throughout the month, BlackEnterprise.com offers a different spin, exploring the business of black music. From the power players who are changing the game to the women who are making waves, from the legends who set the foundation to the artists of the future.

Today, we begin with power player Steve Stoute, a former music executive turned advertising and marketing superstar. He’s one of Jay-Z‘s business partners and he managed to make State Farm‘s “like a good neighbor…â€ jingle sound cool in the 21st century. As the founder and Chief Creative Officer of Translation Consultation + Brand Imaging, Stoute has used his sharp instincts and music biz connections to bring Fortune 500 companies like McDonald’s, Reebok and HP together with top-selling artists like Chris Brown, Justin Timberlake and Lady Gaga. He helps brands appeal to the lucrative youth and multicultural markets by tapping into their collective consciousness with slick ad campaigns and branded entertainment, featuring the entertainers who already have their attention.

For Stoute, the job of a record exec and that of a ad exec aren’t that different in that both are in the business of making “hitsâ€ or selling products that’ll be popular. “I look at all of the work that we do and I come with a ‘how can we make the No. 1 record?’ mentality,â€ he explains. “How can we make this thing matter quickly?â€

Stoute developed his “No. 1 record mentalityâ€ by working behind the scenes molding artists, their images and their sounds as an A&R at Sony, later as president of Black music at Interscope and as hip-hop artist Nasir “Nas” Jones’ former manager. It was while working with the Queensbridge rapper, who was looking to become more than just an underground artist, that Stoute first began to understand the power of marketing and branding. He played a pivotal role in reintroducing Nas with a slicker more radio-friendly sound and a new Mafioso-style image that resulted in hit singles and a platinum plaque for his 1996 sophomore effort, It Was Written.

“The thought process there was, as the music was getting larger the audience that was consuming the music was getting larger and radio stations started to be open-minded to playing rap music at a much higher rate [than] when Nas first released [his 1994 debut] Illmatic,â€ says Stoute. “So going into the second album, what I wanted to do was give him an opportunity to take his talent and play on a much larger platform.â€

One of Stoute’s proudest achievements in the music biz was orchestrating Nas’ 1996 mega-hit “If I Ruled The World,â€ which featured then-rising star Lauryn Hill. “Initially, people were shocked because there was singing on the hook and it was Lauryn Hill,â€ he says. “As you look back on that album you realize that ‘If I Ruled the World’ was a very important song and the collaboration with [Nas] and Lauryn Hill was very important–it’s timeless.â€

Around 2003, Stoute decided to do for himself what he’d done for so many by taking his talents to the next level. That led the brand extender to start making the transition from the music business to the ad business. “What made me want to leave and go into the advertising business was I felt like it was a broader platform,â€ he explains. “For me to effect the State Farm brand and the McDonalds brand and Wrigley’s, DSW, Target… is much different and a bigger platform than I was doing in the record business.â€

Still, the skill set Stoute used to make a record hot or an artist popular were the same ones he employed to make a product successful. “I think in the record industry you were forced to, day in and day out, know the consumer. Your music has to work immediately on the radio station and you immediately had to see sales and the video being requested,â€ he says. “By default you were actually preserving a brand, you were building a brand and I think taking some of those brains of brand building and finding what the consumer really wanted versus what you decided you wanted to sell–those instincts were instincts I brought with me to the advertising business.â€

Over the years Stoute has spearheaded several groundbreaking campaigns and repositioned himself and his company as a reputable and reliable marketing resource. From June 1-4 he’ll take part in ADMERICA!, the American Advertising Federation’s first national conference highlighting the effect of advertising on culture. Taking place in San Diego, Stoute, along with State Farm’s Tim Van Hoof, will host the “Reintroducing a Classic Brandâ€ keynote luncheon session. He also has a book, The Tanning of America, coming out this September that will further explain how his music roots have helped him in the advertising business.

“Hopefully, 20 to 30 years from now you can look at the body of work and say we had hits and we had misses but we mostly had hits,â€ he says. “Being part of timeless moments, that’s all you can hope for when you look back at it. I’m still going through it now, whether it’s the Jay-Z sneaker to launching [McDonald’s] ‘I’m Loving It’ campaign, to ‘If I Ruled the World,’ to State Farm jingles, let’s look at the body of work when it’s all said and done and say, ‘Did the body of work change or elevate the conversation?’ Hopefully, the answer comes back yes.â€ –Timmhotep Aku