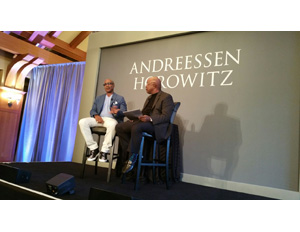 Ken Coleman Breaks Down Silicon Valley
As Ed Lewis autographed books and the networking reception at the main room of the Sharon Heights Country Club continued, Ken Coleman reflected on the mission of the chat series.

“What we’re about here in Silicon Valley is entrepreneurship– starting companies and creating successful lives and careers. It’s a chance for the audience to meet and hear from interesting speakers to learn something, and to have the inspiration to start their own companies, or to see that you may want to stay in a company. But this is a great valley, and I think it’s a great opportunity, an unusually great opportunity for African Americans. I want to influence that, to move that forward, and for people to know about it and be inspired,” Coleman said.

Coleman lauded Andreesen Horowitz for the opportunity to create a platform to expose a lot of thought and thought leaders. However, he said that it was “the whole Essence opportunity,” that gave him a larger view of the world.

Other tech industry leaders at the event expressed their pleasure with the discussion. They included June Riley, CEO at VC Taskforce (and a Black Enterprise TechConneXt panelist); SAP’s senior director of marketing, Gail Moody-Byrd; and Caretha Coleman, owner of Coleman Consulting, board chair, Dignity Health, and wife of Ken Coleman.

“I’d like to thank Ben Horowitz for using his position to create such a fabulous, fabulous opportunity for diversity,” Riley said. “It’s diversity at its highest level where we can make connections that are very meaningful and make friends that will connect us to who we want to be and help us grow to be that person.”

Gail Moody-Byrd added, “What a small world to make connections that can only happen face to face! There is online connecting, but there is nothing like connecting in person. . . I also had an amazing experience over here, meeting somebody who works at the same company that I work with, and I’ve never met him before, and we’ve both been there eight years! The power of networking that happens here is invaluable, it’s priceless. ”

Asked to comment on what others deemed “an amazing evening,” Caretha, wife of Ken Coleman, demurred with a smile, “Anything I said about the evening would be hopelessly biased.”

Ready for a Career Change? 5 Great Websites for Career Switchers