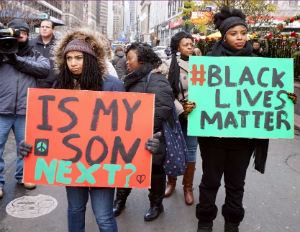 We’ve all seen the names and know the cities — Alton Brown in Baton Rouge, Louisiana; Philando Castillo in Minnesota; Michael Brown in Ferguson, Missouri; Freddie Gray in Baltimore, Maryland; Eric Garner in Staten Island; and Sandra Bland in Prairie View, Texas. These deaths plus a multitude of other police actions and laws — from stop-and-frisk to stand your ground — have galvanized thousands to engage in protests and political action within the Black Lives Matter movement. People don’t want to wait for another news report or Twitter stream about an unarmed African American male or female who was shot by a police officer or died in police custody.

The Black Lives Matter movement has struck a chord with African American executives and entrepreneurs. A growing number are demonstrating that black businesses matter in the fight for social justice. Last year, a group of African American executives and entrepreneurs gathered; not to discuss brokering a major business deal but to advance police reform. The end result was nearly two dozen prominent black business leaders donating $1 million to support the NAACP Legal Defense and Educational Fund’s campaign to promote responsible policing policies at state and local levels to bring more accountability for incidents of police brutality, and to change how prosecutors address issues of racial bias in law enforcement.

William Lewis Jr., managing director and co-chairman of Investment Banking at Lazard Ltd. and Charles Philips, CEO of software giant Infor Global Solutions; based in New York, were designated spokespersons for the group that included African American executives from the nation’s largest publicly traded corporations. “The business community has a responsibility to place resources into the capable hands of organizations that have a vested interest in doing work on behalf of the public and, particularly, the disenfranchised,â€ says Lewis, one of Black Enterprise’s “75 Most Powerful Blacks on Wall Street.â€ He adds, “LDF’s long track record of strategic thinking and solutions-oriented action made it a logical choice for support in this work.â€

A Fight Rooted In History

Black business addressing political, social, and civil rights issues is nothing new. Such activism dates back more than 50 years, when African American entrepreneurs like the late Herman J. Russell, founder of H.J. Russell & Co. (No. 14 on the BE INDUSTRIAL/SERVICE List with $236.9 million in revenues) and brothers Robert and James Paschal; the late proprietors of the Atlanta landmark Paschal Hotel and Restaurant, served as backers of the Civil Rights movement by providing financial support, bail money, and lodging for freedom fighters. And Rev. Leon Sullivan, founder of Philadelphia-based Opportunities Industrialization Center, was the first black appointed to the General Motors board in 1971. He used his corporate directorship to design and advocate for the “Sullivan Principles,â€ a corporate code of conduct that promoted equal opportunity, human rights, and led to the shutting down of 125 corporations in the 1980s; operations and divesting holdings associated with South Africa’s then-Apartheid regime.

“We really believe this is a moment in which we have to transform the culture of policing and change the way we think about law enforcement,â€ says LDF’s President and Director-Counsel Sherrilyn Ifill. She stresses that this issue goes far beyond the civil rights community and has met with leaders from the political, legal, arts, education, and business communities; forging alliances to develop real solutions that can be adopted nationwide.

Road Fever: Why The Bahamas Junkanoo Carnival Needs To Be on Your Bucket List