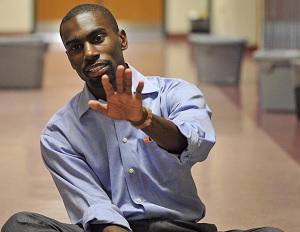 Becoming the 13th and final candidate to jump into the primary race, Mckesson comes to the political game with less of a traditional background compared to his other competing candidates.

“It is true that I am a non-traditional candidateâ€Š–â€ŠI am not a former mayor, city councilman, state legislator, philanthropist or the son of a well-connected family,” the 30-year-old wrote in a blog post for Medium.com. I am an activist, organizer, former teacher, and district administrator that intimately understands how interwoven our challenges and our solutions are.”

Serving as a former public school administrator in Baltimore and Minnesota, Mckesson is a part of a team called Campaign Zero, which seeks to end police killings in America. He gained widespread attention for his involvement in the protest movement in Ferguson, Mo., following the death of unarmed teen Michael Brown and was active on the protest front in Baltimore last year following the death of Freddie Gray.

“Like an old friend, I’ve seen it at its best and at its most challenged,” Mckesson said in regards to his home city.

Mckesson, who has met with top White House officials and presidential candidate to discuss civil rights, recently moved back to his home town to gear up for his political career.

City Councilman Nick Mosby, who entered his bid for mayor back in October, welcomes Mckesson to the race saying, “I welcome anyone to the race and look forward to the discussion about building a better Baltimore.” However, former mayor Sheila Dixon, who is a front-runner in the Democratic primary, says she has not heard of Mckesson and said that with less than three months to go until election she will not be distracted.

Sean Yoes, the host of Morgan State University’s First Edition radio show tells The Baltimore Sun that he believes older African American women, who have long decided Baltimore’s elections, are not familiar enough with Mckesson for him to lead the race.

“If the electorate consisted of celebrities who were politically conscious, then maybe he would have a chance,” said Yoes. “I suspect the vast majority of the most prolific voting bloc in Baltimore City do not know who he is. That’s going to be problematic for him.”

Johnetta Elzie, another well-known Black Lives Matter member who met Mckesson in Ferguson, says that she’s excited for the young activist to run for mayor and is moving to Baltimore to work on his campaign.

“He talks about poverty and race and how those are intertwined,” Elzie said. “DeRay’s path is to be a truth-teller while improving the city he grew up in.”

So far, Mckesson has raised more than $30,000 on his CrowdPac page, which is reportedly more money than any other candidate has raised in 24 hours.

Should You Take a Chance On a Workplace Romance?