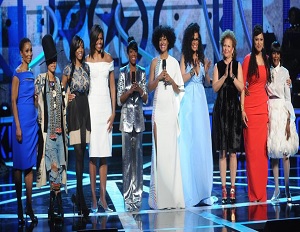 The 2015 Black Girls Rock! awards aired Sunday night on BET. The special TV program is an extension of the Black Girls Rock! non-profit organization, established to promote the arts for young women of color and to challenge the ways women of color are portrayed in media. Every year, the live ceremony celebrates black girls and women who stand as role models through their exceptional work in the spotlight, behind the scenes, and in local and global communities.

One of the greatest moments was when the ever graceful Cicely Tyson received the Living Legend award and delivered an acceptance speech so grand that social media is still buzzing about it. Tyson kicked things off with a joke, saying, “I was told that I have three minutes to speak. Took me three minutes to get up here.â€

After chuckles from the audience simmered, Tyson, who’s also the 2014 Black Enterprise Legacy Award recipient, proceeded, “I want to say to the young woman here tonight, the moment anyone tries to demean or degrade you in any way, you have to know how great you are.â€ The room sat still and hung on every word as she explained that people only try to put down those who are perceived as threats. “Respect yourself and the world will respect you,â€ she said. “Respect elders. Remember that we are standing not on their shoulders, but on their backs. You have to understand that we are the seeds of the work of our elders.â€

Audience members and social media users were equally captivated when First Lady Obama took on the stage. Cheers erupted as Mrs. Obama expressed, “I am so excited to be here at Black Girls Rock! To all the young women here tonight, and all across the country, let me say those words again: Black girls rock! We rock, we rock! No matter who you are, no matter where you come from, you are beautiful, you are powerful, you are brilliant, you are funny.â€

Mrs. Obama assured black girls everywhere that both she and President Obama are proud of them. “Now, I know that’s not always the message that you get from the world. I know there are voices that tell you that you’re not good enough. That you have to look a certain way, act a certain way. That if you speak up, you’re too loud. If you step up to lead, you’re being bossy,â€ she said. The First Lady even recalled her own childhood insecurities, like worrying about how her hair looked or if she raised her hand too much in class. “But eventually I learned that each of those doubts was like a little test. A challenge that either I could shrink away from, or rise up to meet. And I decided to rise,â€ she proclaimed.

Before recognizing the MAD (Making a Difference) Girls honorees, First Lady Obama said to the viewers, “I want you to live life on your own terms, according to your own script. I want you to use those tests in your lives today to make you stronger for the bigger challenges tomorrow… No one just glides their way from success to success. Not me, not the president, not anyone being honored here tonight.â€ She also revealed that education was “the secret to everything in life.â€