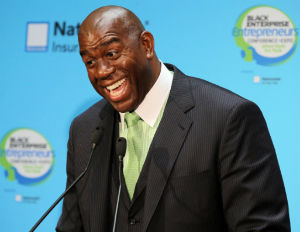 *Press coverage from the Columbus Dispatch*

Black Enterprise magazine’s annual Entrepreneurs Conference & Expo is all about networking, even if you’re the mayor of the host city.

During a news conference yesterday marking the start of the national conference, Earvin “Magicâ€ Johnson talked about the improvements he noticed since his last visit to Columbus.

“We have capital to invest, and we look at cities like Columbus,â€ said Johnson, who runs Magic Johnson Enterprises and has become as successful in business as he once was in basketball arenas.

This remark grabbed the attention of Mayor Michael B. Coleman, who almost jumped out of his seat nearby. He raced over to talk to Johnson when the event ended.

The mayor wasn’t the only one making connections at the Black Enterprise conference, which is attracting about 1,000 minority current and would-be business owners to the Greater Columbus Convention Center.

It runs through Saturday and is sponsored by Nationwide.

Read the rest of the story at The Columbus Dispatch

Want to Watch the Entrepreneurs Conference from Work or Home? Sign up for LiveStream Here