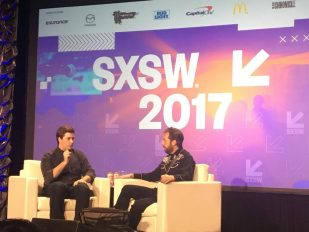 Christine Souffrant Ntim is known for her tenacity and innate ability to hustle, so it’s no wonder she became the topic of conversation after the Chris Sacca one-on-one conversation with Alex Konrad of Forbes at SXSW.

Sacca has been very vocal about being in high support of diversity in tech. During his SXSW conversation, he mentions Tala.co as one of his companies that people should focus on saying, “more than half the company is women.â€ In addition, it has, “a shockingly large number of engineers of color, product people of color, they operate in Africa. We have actual African computer science engineers. It’s an absolute victory,â€ says Sacca.

He goes on to say, “I think there’s two reasons to pursue diversity and inclusion in our business. One is because you should really believe that there’s been hundreds of years of discrimination in our country. You should really believe, and it’s not disputable, that women earn .73 on the dollar compared to men and we should all do our part to fix that sh*t.â€

“Let’s say you’re a cold-hearted Scrooge McDuck a$$hole and you don’t take those things at face value. Either way, it just turns out, the data is clear that companies with women in the boardroom, women at the helm, women through all parts of the stack, diverse populations of employees with underrepresented people representing the company, they do better. They outperform,â€ states Sacca.

So what happened during the Q&A section of this talk? Ntim was on her way to ask a question and two white male individuals tried to dart in front of her. According to Ntim, Sacca immediately called them out saying that he wanted the first question to either be from a woman or someone of a diverse background, putting herÂ first at the mic.Â

She went on to ask, “You get a lot of pitches so you see a lot of innovation from all over the world. Where do you think the next big thing is going to come from? Is it going to come from Silicon Valley or an emerging marketÂ like Haiti, and if so, would you be interested in coming toÂ speak at the Haiti Tech Summit?”

Everyone was so impressed with the way that Ntim articulated her question after her close encounter with being shut outÂ that, for the rest of the night, she was referred to as the girl with theÂ question,Â referencing Sacca’s talk.

What I found interesting about theÂ entire scenario was that when two white males were clearly out of line, literally, after Sacca put them in their place, it took someone who looked like them to speak up. That’s the importance of having allies. I personally think there’s a bigger message here that is very much needed to create the diversity and equality we all deserve.

With that being said,Â the question still remains; as a proponent of diversity, will Sacca continue this conversation at the Haiti Tech Summit?

Suffering in Silence: The Entrepreneur’s Dilemma of Dealing with Stress

6 Qualities to Look for in a Strong Co-Founder