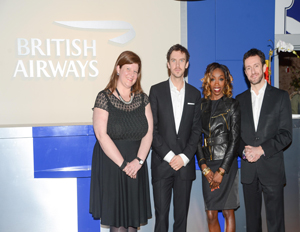 New York City residents can hop the train to SoHo this weekend to get a taste of Great Britain.

British Airways and VisitBritain have teamed up to bring a slice of modern-day England, Scotland and Wales to the states via a 15,000-square-foot space inside 78 Mercer Street. “The Big British Invite,â€ an interactive pop-up event taking place today and Sunday, will feature the best of Britain, offering delectable bites and sips, music and simulations of the highly popular nightlife. It runs from noon to 6 p.m. both days and is open to anyone who is 21 and older who signs up in advance at The Big British Invite website. Admission is free.

The organizers held an opening night reception on Thursday hosted by Grammy-Award winning singer-songwriter Estelle and Downton Abbey actor Dan Stevens. Before the festivities began, Karen Clarkson, vice president of North America for VisitBritain, the country’s tourism organization, and Simon Talling-Smith, executive vice president of the Americas at British Airways, welcomed a group of press who were present for a preview that evening.

The pop-up experience will showcase “what is new, what is now, what is nextâ€ in Britain, said Talling-Smith.

Twelve British Airways flights depart from New York to London daily, hosting over 3,000 travelers between the two areas each day.

“We want to inspire a new wave of New Yorkers to experience the best Britain has to offer–whether it’s an afternoon exploring the Tate Modern or an evening enjoying a dram of whiskey among the sprawling hills of Speyside,â€ said Clarkson, in a statement.

The “American Boyâ€ songstress, who led a tour through the space, gushed about the airline’s comfortable seats, which attendees will be able to try out firsthand, British “comfort foodâ€ and the bar and music scene found in Britain.

ATL Security Guard Goes to Jail After Melee in the Mall