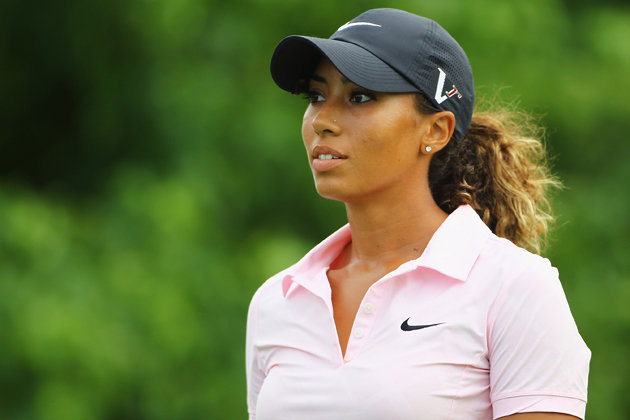 Cheyenne Woods, a player on the Ladies European Tour is the niece of Tiger Woods.

ARDMORE, Pa — Putting her last name and bloodlines aside for just a second, this much is clear: Just about everyone is enamored with Cheyenne Woods.

Everyone in the golf world, that is.

Let’s come back to that.

Ms. Woods made headlines when she asked her uncle a question at his press conference this week at the U.S. Open. “The U.S. Open is usually one of the most grueling weeks of golf,â€ she said. “So what would you do off the course in order to be at ease and relax?â€

“Didn’t expect that,â€ Tiger said after a long pause, grinning. “Well, off the course, we have a great crew at the house and we’re going to have fun. Tomorrow, make sure you’re at the 6:30 dinner? Is that all right? Okay. Perfect. So just relax and have a good time and get away from it and when it’s time to play, it’s time to play. But overall we’re just going to get away from it and not really watch any golf. When it’s time for me to get ready, I’ll get ready.â€

At the U.S. Open this week, Tiger’s niece, a former ACC individual golf champion out of Wake Forest, is a little more than holding her own as a special correspondent for the Back 9 Network. Someone eventually thought to put her in front of a camera. It’s a genius, if not painfully obvious, marketing move. The Ladies European Tour, on which she now plays, only offers so much exposure to the American consumer.

“I definitely want to be able to make sure that I am representing a strong brand and something that I will be proud to represent,” Ms. Woods told BlackEnterprise.com in 2011. “I want to be a good role model for girls that have the same passion for golf as me, so I want to make sure whichever brand I am with puts me in the right light.

“I would like to build a strong personal brand and, right now, I believe my brand is unique. First in that, though I am mixed, I consider myself African-American, and there are not many women on the LPGA tour that look like me. Secondly, I will stand out carrying the Woods name.â€

As it stands, she shares representation with her uncle. But let’s say she joins Roc Nation Sports.

*She’d be immediately on par, so to speak, with stars like Kevin Durant and Skylar Diggins.

*She’d be an inspiration to little girls (a crucial consumer) everywhere.

*Her mere signing would bring major awareness to her brand.

“We are excited about the opportunity to represent Cheyenne,” Mark Steinberg said in a statement when she turned pro. “She had an outstanding career at Wake Forest and has the chance to be a major star on the women’s golf scene.â€

She may very well be on her way to stardom. But the game’s changed. And if the two parties were interested, there’s an opportunity beneficial for all involved.

The golf world loves Tiger’s niece. It’s time for the whole world to be enamored with Cheyenne Woods.

From Professionals to Philanthropists: Two Power Women Making a Difference in Urban Communities

Is Herbalife A Scam or a Way to Success?