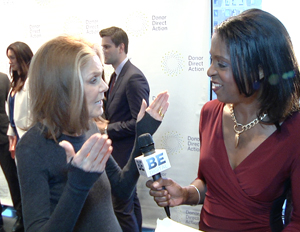 I recently had an opportunity to speak with actress, activist and author Pam Grier at Black Enterprise’s Women of Power Summit in Fort Lauderdale, Florida. When she reflected on her career highlights, she said a moment she will always remember was when then Ms. Magazine editor, Gloria Steinem, whom Grier still calls her mentor, “courageously” put her on the cover of the magazine in 1975. That made Grier the first African American to grace the cover and helped make Foxy Brown an early feminist icon.

It wasn’t just Grier. While she is considered the face of the feminist movement, Steinem, now a vibrant and energetic 81-year-old, says her most important lessons and inspirations came from black women. Not only was Steinem the National Treasurer of the 1970’s “Free Angela Davis” campaign, but she also crafted the television speech the late Congresswoman Shirley Chisholm delivered in her historic 1972 bid for presidential nomination of the Democratic party.

“I thought they invented the feminist movement. I’ve learned feminism disproportionately from black women,” Steinem says. “I realize that things being what they are, the White middle-class part of the movement got reported more, but if you look at the numbers and the very first poll of women responding to feminist issues, African American women were twice as likely to support feminism and feminist issues than White women,” she adds.

Steinem had close alliances with black activists such as the late lawyer Flo Kennedy and Dorothy Pitman Hughes, an early advocate of affordable child care. In the early 1970’s Steinem also published Alice Walker’s work in Ms. Magazine, making Walker one of the first black editors at the publication. (This is long before Walker became a household name for writing her Pulitzer Prize winning novel, The Color Purple.)

Turn the clock forward, and Steinem’s efforts are still held up as a supreme example of what it means to be an activist. President Obama awarded Steinem and 18 other recipients, including Oprah Winfrey, the Presidential Medal of Freedom in 2013. Steinem remarked, “I can think of no president in history from whose hand I would be more honored to receive this medal from.” “I’d be crazy if I didn’t understand that this was a medal for the entire women’s movement” she added.

As for the issues of today, Steinem shared her belief that women are a missing voice in discussions around the country regarding race relations and law enforcement. “All the studies show that if a woman arrives on the scene, she de-escalates the situation by her presence and a man cop escalates it. While we’re talking, as we should, about cops looking like the community, how come we don’t say they should be half women?” Steinem asks.

Steinem continues her work in activism with the nonprofit Donor Direct Action, a group that works to get funds directly into the hands of women’s rights organizations around the world in an effort to minimize bureaucracy.

Steinem champions causes and policies across the globe at a pace that would exhaust most people a quarter of her age, and she continues to write books and articles that inspire people internationally.

She did say there is one vital thing that will aid in progress for all: “Women often have to learn how to treat themselves as well as they treat other people.”

5 Must See Art Exhibits This Spring