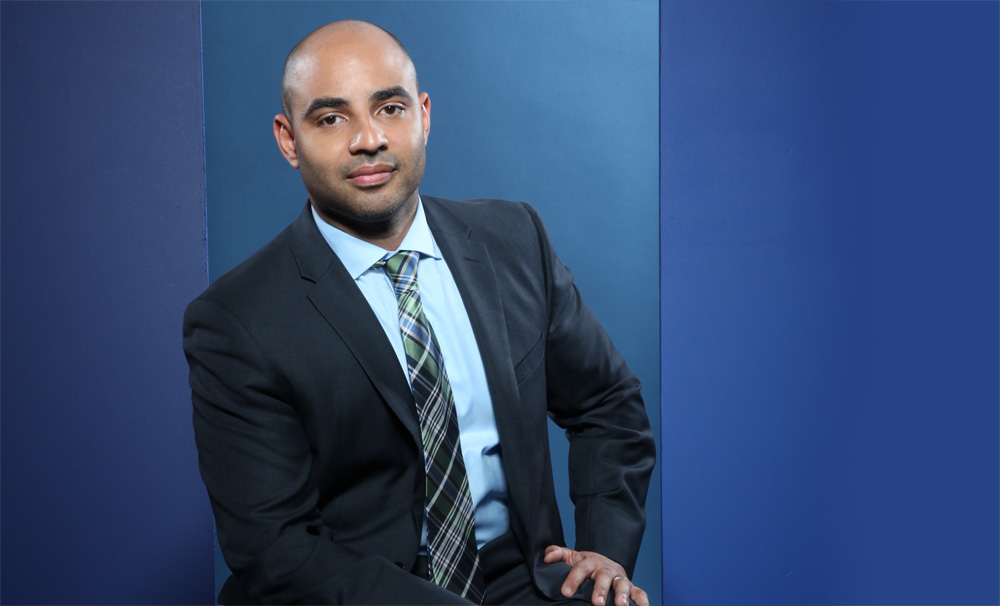 Interesting people live interesting lives. If you have never heard or read that phrase then you should pay solid attention to David Sajous, an avid lover of law and business. After planning his own educational path to follow his passions, Sajous started his career in the epicenter of both law and business—New York. “I always knew what I was going to do,” Sajous told BE Modern Man exclusively. “From planning to executing, I have been able to accomplish what I set out to do, which was to practice law in a business environment.”

The founder and partner at the Ares Group, a sports and entertainment management company, Sajous also serves as  in-house Counsel at a global investment bank. A son of Nicole and Pierre Sajous, this pride of Port-au-Prince, Haiti, never took any shortcuts when it came down to preparing for success. “It took a lot of hard work and perseverance to get to where I am now,” he says. “From law school to practicing at a law firm, I had to perform at the highest level every day. When the people around you see all of the hard work, time, and effort you put into accomplishing your dream, you earn the trust and respect of your peers and supervisors. From there, you create your own reputation.”

A University of Florida graduate who received his law degree from Northwestern, Sajous’s reputation is rooted in the key tenets of success that run within a black man’s DNA. “I think heart is a much overlooked trait that black men carry,” he says. “Heart is that will to win, that competitive fire, that attitude that you won’t back down from a challenge.” Sajous’  passion to succeed and put it all on the line is second-to-none in his industry. It is a trait that he inherited from his father, an owner and entrepreneur himself, who owns the environmental engineering company Aquathin d’Haiti.

“We have to approach every opportunity and every instance of adversity with that attitude,” he says when speaking of how to bring that same spirit into avenues outside the stereotypical norm. “We have to find that will to rise above it, not accept anything less than success and serve as an example for those around us that they can achieve it too.” We asked Sajous how he, as a role model, breaks through the noise and makes an impact among the millennial generation. “Leading by example is probably the most effective way to make an impact on black youth,” he told us. “You don’t need to be the next LeBron James or Jay Z to make an impact on someone’s life. The more that black youth see people who look like them, coming from where they come from, facing the same challenges that they face —they will be empowered to achieve greatness.”

One of those paths to greatness is through education. Hoping to debunk the myth that there are more black men in prison than in college, Sajous encourages those interested in success to utilize higher education to get ahead. “Education and learning are fundamental to finding success in any job,” he says. “You will be completely shut out of job opportunities if you have not achieved a requisite level of education or learning in your field of choice. The issues arise when we don’t place more value on and devote more resources to alternative educational opportunities.”

As a man with strong character, impressive family roots, and a discipline,  Sajous knows that his impact within his community is sound. “Leading by example, again, is one of the most effective ways to make an impact on the lives of others,” he tells BE Modern Man. “It’s empowering to see someone who looks just like you or someone who came from the same place you come from going on to become successful and achieve great things.” As Sajous, who doesn’t shy away from commitment, continues to develop and advance to the next stage of his own career, BE Modern Man is confident that he will be able to build up a new crop of successful men and women for the 21st century.

It is because of these things that we are proud to call Sajous a BE Modern Man. Through his strength, resiliency, fortitude, and sheer will to be an excellent force of nature, Sajous understands that the distinction is a responsibility to share knowledge to others, not to gain status or recognition. “To me, a BE Modern Man exemplifies that man living next door or seated down the hall who has achieved great things. Our progress, as we delve deeper into the 21st century, will not be measured by how many are recognized or given accolades, but by how being a BE Modern Man becomes the norm everywhere and not the exception.”

We at Black Enterprise salute you, David Sajous for contributing positive images of African American culture to the masses. Your mission of leading by example and competitively creating the next generation of critical thinkers not only frames us in an enthusiastic light, but proves that our normal is extraordinary, and is meant to be celebrated and appreciated. Be sure to follow the latest and greatest from David Sajous ( and us at @blackenterprise!) on Twitter.