One Word That Describes You: Grateful

Responsible for an infant baby who had been born prematurely, Berthia could not see a way out of the nearly $250,000 in medical costs accrued for the infant’s care. So he took a visit to the Golden Gate Bridge. His first ever visit. Feeling overwhelmed and like a personal failure being at the forefront of his mind, Berthia felt that free falling from the bridge would free him of all his pain. “My greatest achievement is deciding not to jump of the Golden Gate Bridge,” says Berthia. “I refer to it as when I “came back over; over the railing, over the anxiety, over the suicide, and over into my next chapter.”

California Highway Patrol Officer Kevin Briggs, was instrumental in helping Berthia “come back over” that day. Today, meeting people where they are and guiding them to a place of peace is where you will find Berthia doing his best work. “Just being an honest person these days can break through the toughest walls,” Berthia tells BE Modern Man. In May of 2013 Berthia had his first speaking engagement in New York where he captured the audience through his story. “The impact that my speech had with the audience caused me to want to inspire others and instill hope for a better tomorrow. After that moment, I was invited to share my story at events supporting Mental and Suicide Awareness.” Having gone years without opening up he realized that being transparent and open to others was a way to heal people. “I had to realize that it wasn’t about me, it was about the message,” says Berthia.  And the message is of hope.

Berthia travels the country providing his message of hope to those suffering from mental illness, hoping that he will provide them with their own “come back over” experience. “There is a void that I aim to fulfill in my community for African American men and boys who struggle in silence with a mental illness,” says Berthia. “My goal for the future is to pack arenas and speak life into my message of hope until men realize that sometimes being strong means asking for help.”

Berthia realizes that there are many ways to “come back over” and find success in your calling. “There is no one path to success.” Different people take different routes to get there. Understanding who you are and discovering your personal route to success is most important,” he says. His route to success came via the Golden Gate Bridge and today he uses that experience to save lives.

It takes courage to “come back over” and the team at Black Enterprise salutes Kevin Berthia for finding the strength to keep pushing forward despite the obstacles ahead. It is this strength and willingness to inspire others through one’s personal struggles that define the BE Modern Man.

It’s our normal to be extraordinary. Follow and join the BE Modern Man conversation with #BEModernMan and @blackenterprise. 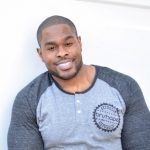