Barack Obama and Hillary Clinton Named Most Admired People of 2014 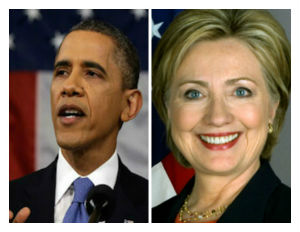 According to recent Gallup poll results, Americans view President Barack Obama and Hillary Clinton as two of the most admired people in the world in 2014.

Making the prestigious list is nothing new to Clinton or POTUS, with Clinton having appeared on the list 19 times, easily the most of any woman in Gallup history. This year, is her 17th time in 18 years appearing in the No. 1 spot for most admired women, and Obama’s 7th year in the top spot for men.Â  Clinton’s streak was interrupted by former first lady Laura Bush in 2001 following the 9/11 terror attacks.

Joining them on the list are a sea of other prominent figures such as Oprah Winfrey, who came in at No.2 on the list for women, Condoleeza Rice, First Lady Michelle Obama, Bill Clinton, Ben Carson and Bill Gates just to name a few.

Although both Clinton and Obama have been on a roller coaster ride in terms of popularity numbers this year, Gallup’s recent results show that they both remain prominent enough to be most admired by Americans today. Information for the poll was gathered by telephone interviews that took place Dec. 8-11, 2014, with a random sample of 805 adults who were asked to name the woman and man they admired most.

Hate Your Job? Quit…But Not Before You Read This