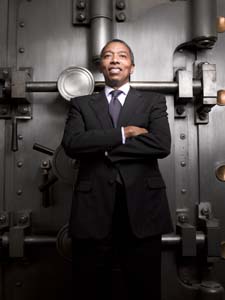 City National Bank (No. 8 on the BE BANKS list with $358.43 million in assets) is a Newark, New Jersey, institution that has flourished during boom and bust cycles for nearly four decades. But just as its headquarters rests on the intersection of Broad and Green streets, just a few feet away from City Hall, the bank itself is at a crossroads.

The longtime commercial real estate lender aspires to transform itself from a bank that generates revenues primarily from commercial real estate loans to one that offers a suite of higher-quality consumer and small business loans. But this transformation isn’t just about boosting the bottom line–it’s about fundamentally changing the bank’s business model so the institution can survive in an environment where the old rules no longer apply.

The last few years have been unforgiving for many community banks, and City National is no exception. The bank, which has seven branches and several ATMs, didn’t get caught up in the trading of mortgage-backed derivatives that devastated a slew of commercial banking giants, but it was heavily exposed to the real estate downturn by way of loans to churches and local commercial properties, areas at the core of City National’s business. As mainstream America fretted over the stock market, foreclosures and business bankruptcies skyrocketed in inner cities.

“Real estate values tumbled all over the country and even more so in urban markets, where we were a big lender,â€ says President and CEO Preston D. Pinkett III. “Well, in low-income communities borrowers are stretched thin–there isn’t as much of a cushion. So, the bank had to absorb a lot of the economic shock.â€ The bank was forced to foreclose on roughly 7% of its properties across both residential and commercial loans, and those non-performing assets weighed down the books.

What it Takes to Recharge Your Career