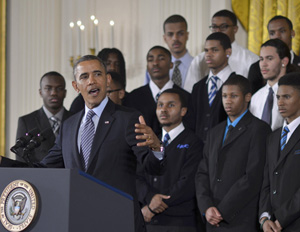 On Tuesday, President Obama’s TechHire initiative was introduced to the city of Baltimore, Maryland. TechHire is the president’s effort to place those in underserved or at-risk demographics into the open half-a-million, well-paying tech positions that employers across the nation are desperate to fill.

Senior officials from the president’s administration gathered at City Garage, including U.S. Chief Technology Officer, Megan Smith. Baltimore is the latest city to join the TechHire program, launched by President Obama in March 2015.

As part of the TechHire program, businesses and organizations in Baltimore and other participating cities can apply for the $100 million in Department of Labor grants dedicated to tech training. $50 million will go specifically to support training and job placement for those ages 17-29. Other targeted groups for the grant money include individuals with disabilities, those with limited English-speaking skills, and those with criminal records.

In fact, 14 grants, totaling $20 million, have been set aside to provide training and access to tech jobs for those over the age of 18 who were formerly incarcerated.

The initiative includes training in web development, cyber security, digital advertising, and more. Leading the Baltimore initiative is OneBaltimore, an organization put together to rebuild the local communities after the civil unrest and violence that occurred after the death of Freddie Gray while in police custody.

At the event, U.S. Secretary of Labor Thomas Perez said the job-training focus would be on boot camp-style training programs, and hiring or training programs that use data or other innovative methods.

“These grants are not about ‘train and pray,’â€ he said. Instead, it’s about “finishing training on Friday, and starting work on Monday.” The grant applications for about 35 spots just went live on Tuesday, reports Technical.ly Baltimore.

In a statement to BlackEnterprise.com, Mayor Stephanie Rawlings-Blake said, “In urban centers like Baltimore, we know that growing technology companies are creating jobs and opportunities, but if our residents are not prepared with the necessary skills, these jobs will pass them by and they will be left behind. The need for better training opportunities is particularly true for residents of some of our communities that are not frequently seen as a source for tech hires. If we can reach these neighborhoods, we can open up entire new pathways for long-term career success. TechHire can help to close that gap.â€