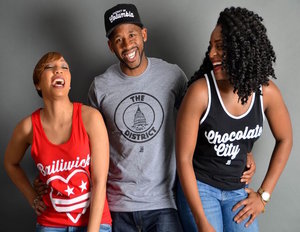 The District of Columbia (D.C.) was the first major American city to achieve a black majority.

And yet, gentrification, defined here as the arrival of wealthier residents in an existing urban district and the removal of poorer residents, has significantly altered the city’s racial demographics, character, and culture.

In 2011, Washington, D.C.’s population dropped below 50% for the first time in more than 50 years. “I think gentrification has politics behind it,â€ said Lisa Sturtevant, vice president for research at the National Housing Conference. “I don’t think it’s necessarily a word everybody knows. But I think it’s one of those things where you know it when you see it; right when you walk through the neighborhood, when you talk to people about their experience, that there’s common threads in what gentrification means to people,â€ she concluded.

The Bowser administration has responded to mounting criticism from community organizers and long-time D.C. residents by developing the D.C.’s New Communities Initiative, a $400 million, public-private urban redevelopment partnership modeled after the federal Hope VI program. “The vision for the New Communities Initiative is for vibrant mixed-income neighborhoods that address both the physical architecture and human capital needs, where residents have quality affordable housing options, economic opportunities, and access to appropriate human services,â€ according to the Office of the Deputy Mayor for Planning and Economic Development.

And yet, this vision is not entirely new, and similar initiatives undertaken in the past have not always achieved desired outcomes. In 2008, for example, the Temple Courts property, located in Ward 6, was demolished by developers. Former Mayor Adrian Fenty promised that upon demolition, the property would be replaced with a $700 million mixed-income unit that would accommodate 570 families. Five years later, what used to be Temple Courts is now a parking lot. Only 22 of the more than 200 families that were displaced have moved back in.

In the wake of increased displacement of poor black residents and an absence of effective public-private economic development plans to combat further displacement, retail entrepreneurs are using their brands to commemorate the cities chocolate legacy.

Bailiwick Clothing is a D.C.-based apparel brand that merges the worlds of design and culture. The brand was created by two African American men who share a commitment to designing cool, casual streetwear that reflects the pride, energy and history of D.C. “As a brand, Bailiwick Clothing isn’t afraid to touch on social issues, and gentrification is one that’s especially sensitive here in D.C.,â€ said JC Smith, co-founder and CEO of Bailiwick Clothing.

Smith is committed to researching the history of the city and eliciting feedback from long-time D.C. residents to influence the type of designs, slogans, and images that appear on Bailiwick clothing and apparel. “We spend a lot of time researching the history of D.C; looking at things like the black Broadway on U Street project, to scouring the D.C. public libraries, to talking to old timers at the barbershop. We are constantly trying to learn more about the heart and soul of The District, and then we try to weave those authentic stories into the clothing we make,â€ Smith noted.

Smith recently launched a unisex t-shirt with the words “Chocolate Cityâ€ plastered on the front. For decades, the phrase has been affectionately used by Washingtonians to denote that the city is majority black. In addition, “We have been working on some designs that directly address gentrification issues in the city, but we want to do it right. We’re currently testing a few of these product prototypes to make sure the message is clear and strong, while still being uplifting and positive,â€ said Smith. “Stay tuned for a future line of shirts that reflect some great moments in D.C. history,â€ he concluded.

Mid-week Mindfulness: Be Mindful at Work