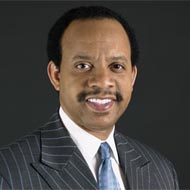 The black business community lost one of its leaders Tuesday morning. Ronald D. Brown, 55, president and CEO of Atlanta Life Financial Group, died from complications after surgery. The executive was the driving force behind the transformation of Atlanta Life from an insurance company to a full-fledged financial services firm.

The company’s board of directors named William A. Clement as interim president and CEO.

Brown joined Atlanta Life in 2004, coming out of retirement to head the company. He had taken Synavant Inc., a software company, public, and had made a sizeable sum of money. However, Brown felt it was time to give back. “He was concerned about the future of African Americans and what this company meant to African Americans and how it would not only be supportive to those who are supporting the company today but our children and children’s children,” says Henrietta Antionin, vice president of public relations. “He wanted the company’s legacy to be strong and remain.”

It was that determination that brought Brown out of a comfortable retirement. “It isn’t [hard to come out of retirement] when there is a good enough reason,” he told BLACK ENTERPRISE during an interview a few weeks before his passing. “And I thought this was a good enough reason. Throughout my working career I made a lot of money for other people, and I’ve actually kept some of it for myself. And this was an opportunity to finally do something for people who look like me and make a difference. If done right it would really make a difference.”

He did more than just make a difference. In the ensuing years, he spearheaded the transformation of the company from an insurance provider with one revenue stream to a financial services business with arms in asset management, investment banking, and group reinsurance. He was a crucial part of the 2007 Jackson Securities acquisition which gave Atlanta Life a much-needed presence in the investment banking space.

Under Brown’s leadership, assets under management climbed from $54 million to more than $1 billion. Being a solid leader was something the Morehouse graduate was passionate about. “I use a phrase in all of my staff meetings: ‘None of us are as smart as all of us.’ And I believe that,” he had said. “This is about how well you can do something as a team. People didn’t create corporations and companies because they didn’t have anything better to do. They created them because they were stuff that they couldn’t do by themselves and they had to have other people.”

The loss of Brown’s leadership is a devastating blow to Atlanta Life. “I often thought of him as a player-coach because he would teach and coach. He was very much a student of the game of corporate life, which he saw as a subset of broader life,” recalls Donald Smart, chief legal counsel for Atlanta Life Financial Group. “Working with him was usually instructive,

Coming to a Monitor Near You