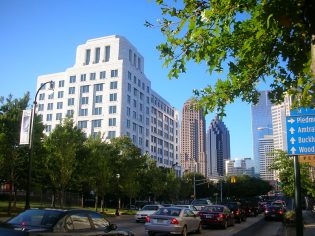 For the first time in its 103-year history,Â the Federal Reserve Bank of Atlanta has named anÂ African American as its president and CEO. On Monday, it was announced thatÂ Raphael Bostic, an openly gay black professor at the University of Southern California, will succeed Dennis Lockhart, who retired on Feb. 28.

“We are very pleased that Raphael will join the Atlanta Fed as its president and chief executive officer,” said Thomas Fanning, chairman of the board of the Federal Reserve Bank of Atlanta, in a press release.

Fanning also described Bostic as “a seasoned and versatile leader, bringing with him a wealth of experience in public policy and academia. Raphael also has significant experience leading complex organizations and managing interdisciplinary teams. He is a perfect bridge between people and policy.”

Bostic, who is slated to begin leading the Atlanta Fed institution on June 5, said he is looking “forward to confronting the challenges the Federal Reserve faces in today’s increasingly global and rapidly changing economy.”

Before returning to USC, Bostic served as the Assistant Secretary for Policy Development and Research at the U.S. Department of Housing and Urban Development under the Obama administration, from 2009 to 2012. He is also a known champion for working class families, affordable housing, and seniors.

“Housing lies at the very heart of our health, our education, our economy, our public safety, and our individual success,â€ he wrote in an article published last September.

The New Jersey native graduated from Harvard University in 1987 with a double major in economics and psychology before earning his doctorate in economics from Stanford University in 1995. He then went to work as an economist in the monetary and financial studies section at the Fed Board in Washington, from 1995 to 2001.

According to the Brookings Institution, prior to Bostic’s appointment, none of 134 people who have served as regional Fed presidents were African-American or Latino. In addition, only six women have filled this position.

This ‘Queen Boss’ Reigns in the Beauty Box Biz