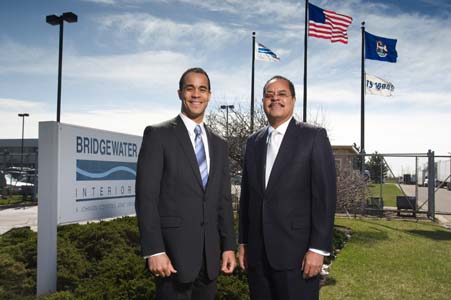 The constant hum of heavy machinery fills the air at THE 125,000-square-foot plant where nearly 350 employees are hard at work. In two shifts, the team will assemble nearly 1,200 seats for the Ford Focus and 300 for the Cadillac DTS and Buick Lucerne. It takes only 12 minutes for the quick, efficient crews to complete a set of seats for the Focus, and 20 minutes for the more complex Cadillac.

Nearly 75% of the process is automated: Large robotic machines meticulously assemble, scan, test, and move components on to the next stage of production.

Business has picked up for Bridgewater Interiors L.L.C. (No. 2 on the be industrial/service companies list with $1.6 billion in revenues). The 12-year-old Detroit-based assembler of automotive interiors has returned to profitability, thanks to increasing demand for parts from its customers: Ford, General Motors, Chrysler, and Honda.

In little more than a decade, Bridgewater went from being a startup with one customer to a billion-dollar business with four manufacturing facilities that serve nearly every major automaker. At the center of it all is Hall, who went from heading a nonprofit that provided procurement opportunities for minority businesses in Detroit, to employing 1,500 people as founder of the nation’s second largest African American—owned enterprise. For creating a sustainable, scalable business that weathered the worst the economy could throw at it and returning to greater profitability and revenue growth, Black Enterprise has named Bridgewater Interiors its 2011 Industrial/Service Company of the Year.

Five Job Benefits You Should Be Using, But Arenâ€™t

5 Ways to Protect Your Mail from Identity Theft