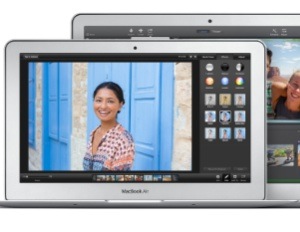 Apple's MacBook Air retains the same slim design, but has slightly updated internals, as well as a lower price.

While it’s not a major evolution in the line, today Apple released an incremental update to one of its most iconic laptops: the MacBook Air.

It also chopped $100 off the entire line, making it a little easier on your wallet. The price decrease makes the cheapest MacBook Air $899. “Macs have never been more popular,” said Phil Schiller, Apple’s senior vice president of Worldwide Marketing. “And today we’ve boosted the performance and lowered the price of MacBook Air so even more people can experience the perfect everyday notebook.â€

The updated notebooks now use fourth-generation Intel Core i5 and Core i7 processors, running at a slightly quicker 1.4GHz instead of the previous 1.3GHz. They still boast a solid nine to twelve hours of battery life.

Both the 11-inch and 13-inch models still have the same slim dimensions and weight (2.38 pounds for the 11-inch model) as their predecessors.

Of course, the reduction in price could make room for a slightly more expensive and highly rumored 12-inch MacBook Air with a Retina display.

It isn’t out of the realm of possibility. Apple’s high-end notebooks and tablets have boasted the high-resolution screens, with the feature slowly trickling from the 15-inch MacBook Pro to the 13-inch model, and most recently the iPad mini.

You can purchase the updated MacBook Air models today from Apple’s online store.