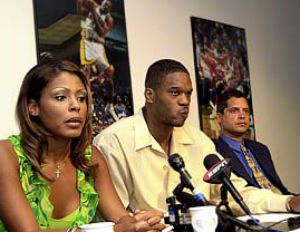 Former Chicago Bulls player Antonio Davis is getting divorced from his wife of 19 years, Kendra Rae Davis. Kendra, a former interior designer, filed for divorce in June of 2013. She has now made allegations that her soon to be ex-husband is stealing from their joint account.

According to MadameNoire, Kendra is accusing Antonio of withdrawing hundreds of thousands of dollars. Close to a total of $750,000 to be exact. Nearly $600,000 dollars was used to purchase a home. Kendra now wants that money back and for her legal fees to be paid.

According to Georgia divorce law: “Even if one of the partners never earned one dollar, that partner is considered to have contributed to the family’s property (or wealth) and has rights to a percentage of that property.”

Do you think he should pay it back?