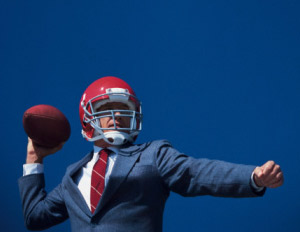 It’s difficult for the average working person to feel empathy for a current or former professional athlete who seemingly squandered his or her millions. The reality, however, is that pro athletes have a far shorter span of peak earning years than most professionals and many of them are going broke at a rapid and consistent pace. Enter former NFL and CFL player Anthony Simmons and the Pro Athlete Business Group. Â Simmons’ company, along with Emerald Financial & Business Solutions LLC host a bi-annual Franchise & Investors Show geared specifically towards athletes in the hopes of steering pro ball players away from bankruptcy and into a healthy financial life after sports. With the latest event taking place February 19-20 in St. Pete, FL, BlackEnterprise.com caught up with Simmons, who explained his mission.

What was it specifically that made you start this conference with an emphasis on franchising?

What made me start it was I was a product of that environment myself. Playing in the NFL and going broke after my first year in the league and not having any tangible investments or franchises or business once I left.

How did you end up in that predicament?

My first year in the league, coming from a not so well environment in Oakland, CA. I’m the youngest of nine kids and once you get that money and you’re coming out of college, its like, “Wow, I can spend all this and I’m going to get it again next year.â€ I was thinking I was going to play forever.

A recent MSNBC article suggested that a large portion of NFL players were living paycheck to paycheck. What is it about the NFL specifically that you think fosters that behavior? Is it a keeping up with the Joneses issue?

You’re right; it’s like keeping up with the Joneses. When I entered the NFL, everybody had Mercedes, and Porsches and nice cars. So the first thing I went and bought was a Mercedes. I didn’t need a Mercedes; I just went out and bought one because everybody else had one.

Society sees NFL ball players as rich individuals. I think it affects a whole lot of athletes, even to this day. Those who are making the league minimum of $375,000; they take home $260,000 and they still want to buy a house or a car and once they do that they’re literally broke. They don’t have any more money and they base [their financial decisions] on the next year that they’re going to go and play. Well, what if you don’t make it next year? What if you get hurt? What if the team just doesn’t want you anymore? Then you’re stuck; so how are you going to pay for the stuff you got? That’s why the ratio is 82% of professional football players go broke two years after they retire. They tell you when you come into the league that 60% of you guys are going to end up broke, divorced or homeless.

Is that high percentage due to the fact that most NFL careers only last two to three years but many of these players think they’ll play 10-12 years?

What kinds of tips and advice are offered to former and current players during the conference?

Now I don’t invite agents to the event because we wouldn’t have this problem if they were doing what they were supposed to do on the athlete’s part as far as investments. This is an opportunity for [the athletes] to take for themselves. There are no obligations and no pressure. More than 32% of the athletes who attend the shows took advantage of the opportunity, whether it’s an investment or a franchise or a business.