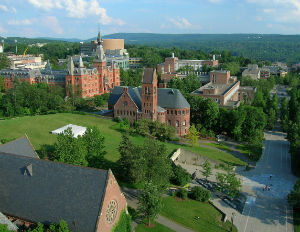 Over the last decade, dozens of colleges have proclaimed that recruiting a more economically diverse student body was a top priority. Many of those colleges have not matched their words with actions. But some have. Poughkeepsie, N.Y.-based Vassar College is America’s most economically diverse college, according to The Upshot, a data-driven journalism site of The New York Times. Grinnell, Ind.-based Grinnell College, and U.N.C.-Chapel Hill, based in North Carolina, came second and third, respectively, on the listing.

The economic differences between college graduates and everyone else have reached record levels, yet, for many low-income children –even many who get A’s in high school and do well on the SAT — college remains out of reach, reports The Upshot.

To measure top colleges’ efforts on economic diversity, The Upshot analyzed data for every college with a four-year graduation rate of at least 75%. It then combined data on enrollment and tuition costs to measure how hard each college is trying to attract and graduate poor and middle-class students, to calculate the College Access Index. The Index is based on the share of freshmen in recent years who came from low-income families (measured by the share receiving a Pell grant) and on the net price of attendance for low- and middle-income families. The colleges’ endowment per student, which is a measure of the resources available to colleges was also included

The Upshot results does not indicate that these colleges are more ethically or culturally diverse but that campuses are more populated with a mix of rich, middle class and low-income students. When it comes to college students studying with people of different racial and ethnic backgrounds, US News & World Report revealed totally different findings. Rugters, Andrews, Stanford, and St’ John’s University topped the list of the most racially diverse colleges.

The U.S. News study in the total proportion of minority students, leaving out international students, and the overall mix of groups. The data was drawn from each institution’s student body for the 2013-2014 school year.The categories used in their calculations were black or African-American, Hispanic, American Indian, Asian, Pacific Islander, white (non-Hispanic) and multiracial. Students who did not identify themselves as members of any of those demographic groups were classified as whites who are non-Hispanic. Their formula produced a diversity index that ranges from 0 to 1. The closer a school’s number is to 1, the more diverse the student population.

Among the top most ethnically diverse colleges are: